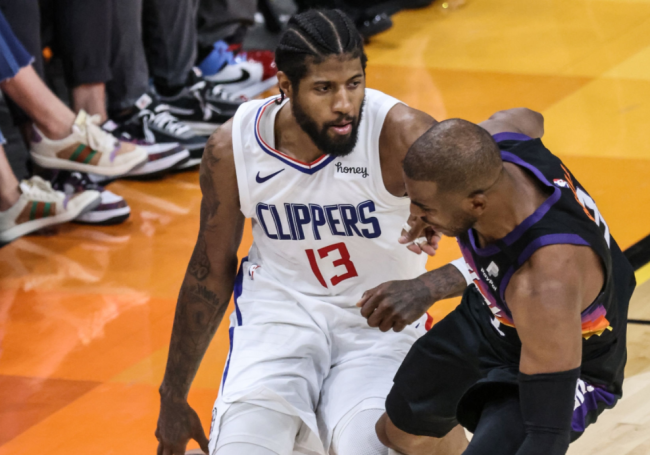 Even if you didn’t watch a single second of Game 5 between the Clippers and Suns on Monday night, you most definitely saw Paul George send Chris Paul flying with a crossover all over social media.

George had a stellar night in Los Angeles’ Game 5 win putting up 41 points, 13 rebounds, and six assists, but sending Paul on skates was undoubtedly the highlight of the night.

You could absolutely make the argument that George got away with a bit of a push on the move, but given that Paul is notoriously known for his flopping, it was nice to see the refs not blow the whistle on this one. George draining the wide-open three-pointer was the perfect chef’s kiss to finish the play.

Paul George stops on a dime and buries the triple!#NBAPlayoffs on ESPN pic.twitter.com/M140IkPz73

Twitter, as per usual, gave Paul the meme treatment and did not disappoint. The internet stays undefeated.

Chris Paul on that snatch back from Paul George was like: pic.twitter.com/DxuIR1v3dw

Chris Paul out there on skates pic.twitter.com/kMHHHxAwCX

These are the moments Twitter was made for. Whenever some hilarious play occurs like this, it’s always amazing to see what people come up with and which memes catch fire and which don’t. It’s safe to say that all of these were brilliant.