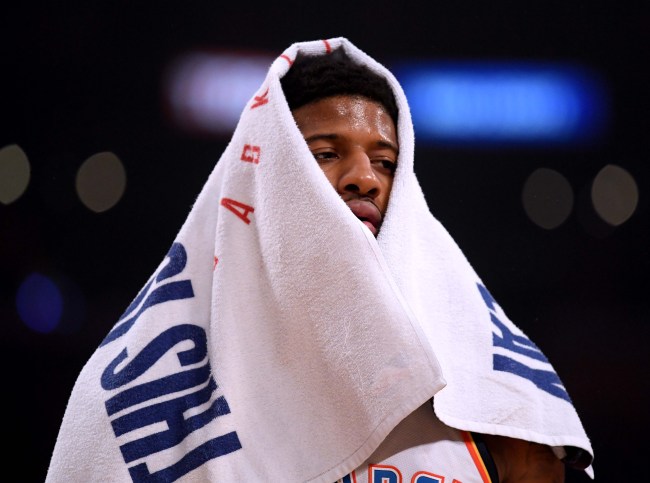 Paul George pulled off the ultimate power move over the holiday weekend by demanding a trade from the OKC Thunder to the Los Angeles Clippers to team up with Kawhi Leonard, setting up the franchise for a serious chance to win an NBA title. And while George and Leonard are returning close to home — both were born and raised just outside L.A. — many wonder why the All-Star forward didn’t just sign with the L.A. Lakers last summer as a free agent; which was widely rumored.

It’s a good question to ask, as Paul George had every option at his disposal as a free agent in the summer of 2018. Ultimately, George decided to re-up with the Thunder on a four-year deal worth $137 million — which was the most he could have gotten. So why did he spurn the Lakers, remain in OKC for another season and now force his way to the cross-town Clippers a year later? Apparently, George was upset the Lakers didn’t trade for him in 2017 while he was still on the Indiana Pacers, refusing to give up young assets like Brandon Ingram and the No. 2 overall pick, per Marc J. Spears of The Undefeated.

Los Angeles wasn’t in the picture. The native of Palmdale, California, about an hour drive outside of L.A., had even turned down a chance to meet with the Lakers as a free agent last year. George was disappointed that the Lakers had declined to trade the No. 2 pick in the 2017 NBA draft (Lonzo Ball) or young forward Brandon Ingram to the Indiana Pacers to acquire him, a source previously told The Undefeated.

So after the Pacers traded him to the Thunder, George re-signed for max money in Oklahoma City. In hindsight, it was a smart move to get more financial stability (the Thunder could offer the most) and figure the rest out later.

The fact that Paul George didn’t even take a meeting with the Lakers was always surprising, so there had to be something beneath the surface that made him decide to turn them down. This report sheds some light on that, because George was believed to be a lock to play for the Lakers. Now he’s on the Clippers, which was something that Spears briefly detailed.

According to sources, since George, Westbrook and the Thunder suffered a disappointing first-round exit in the playoffs in April, Westbrook has been quietly grumbling about the team’s struggles and may want out. George, meanwhile, beat him to the punch. George asked his agent, Aaron Mintz, to tell Thunder general manager Sam Presti not only that was he requesting a trade but also that he wanted to join forces with Leonard, sources said.

The call was a tough one for Mintz. According to a source, George and his family had felt welcomed by the Thunder organization and were treated in spectacular fashion. But the trade request demonstrated how disappointed George was with the team’s season and how much he wanted to join Leonard. A source also said traveling to Oklahoma City (and Indiana) wasn’t easy for George’s family, which is based in the L.A. area.

If you’re a Lakers fan, it’s probably upsetting to hear how Paul George held the team’s decision not to trade for him against them in free agency last year. But considering the assets the team would’ve used to acquire George were used to get Anthony Davis, there’s probably a little solace. Still, with George and Leonard now on the Clippers, it has to sting to know he forced his way to the city rival instead of the purple and gold.