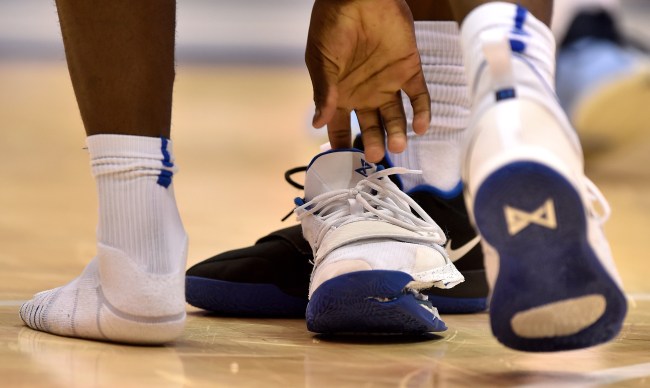 In case you weren’t aware, the style of Nike shoes Zion Williamson blew out during the North Carolina-Duke game Wednesday night are the PG 2.5 PE, the signature shoes of Oklahoma City Thunder star Paul George.

This happening to Williamson could not have been much worse for Nike – 30 seconds into one of the most-anticipated college basketball games of the year, and to the consensus number one overall pick in the upcoming 2019 NBA Draft.

After the game, Nike issued a statement about the incident, saying, “We are obviously concerned and want to wish Zion a speedy recovery. The quality and performance of our products are of utmost importance. While this is an isolated occurrence, we are working to identify the issue.”

Fortunately, Williamson reportedly only suffered a knee sprain as a result of his Nike blowout.

Coach K: “We’re very concerned about Zion. It’s a mild knee sprain. We will know about length of time tomorrow. It’s stable. Obviously it has an impact. You lose the NPOY on the 1st play.” pic.twitter.com/SCq6DBjnkJ

Naturally, because… internet… people on Twitter figured that blasting Paul George would be the next logical thing to do in this very bizarre situation.

Bad look for @Yg_Trece with Zion blowing out his signature shoe in tonight’s game. So sad to see his MVP year go down the drain like that.

Pretty sure that Paul George doesn’t actually make the shoes Nike sells with his name on them. Oh well, let’s continue.

@Yg_Trece man your shoe almost ended @ZionW32’s career. Call @Nike and tell them to make a better basketball if they’re going to use your name.

Do these people really think George actually constructs the shoes?

People really act like @Yg_Trece gets a check from Nike for literally making the shoe or something 🤦🏻‍♂️ https://t.co/YKbQT0CQNf

The silence from @Yg_Trece is deafening

That’s because he doesn’t actually make the shoes. In case I wasn’t clear on that point.

.@Yg_Trece what gives bro? No apology?