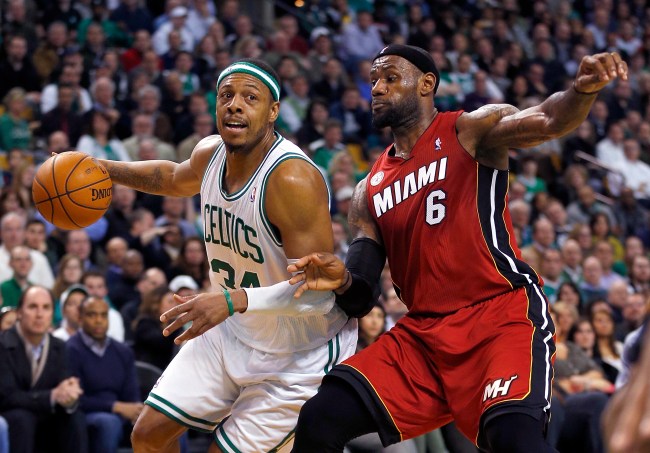 Paul Pierce may not be LeBron James’ biggest rival ever, but he’s definitely up there after the two had some epic battles back in the day in the Eastern Conference playoffs. And, while Pierce no longer calls the NBA his day job — instead opting to sit and talk hoops on ESPN — it’s clear that there’s no love lost between he and James.

In the most recent example, Paul Pierce fired a hot take against James while talking to TMZ Sports recently. Asked if he thinks LeBron should leave the Lakers and get a new team — which would require him forcing a trade — the Boston Celtics legend paused for a good five seconds before replying with a smirk, “No, LeBron is doing very well out here with his production company,” before sharing a laugh with the cameraman and closing his car door. Ouch, that’s got to add insult to the injury of the pathetic Lakers season, which hasn’t gone as James planned when he signed last summer.

Paul Pierce got the nickname as “The Truth” while playing in the NBA, and, let’s be honest, he’s giving the truth here. While Zion Williamson is an absolute monster, he’s the most prized (potential) rookie since, well, LeBron James back in 2003, so, assuming the Lakers don’t a) get lucky in the NBA Lottery, or b) completely rig the NBA Lottery in order to appear lucky, there’s no way in hell the team that snags the No. 1 pick would be willing to trade out of the top spot to help the Lakers. Even with some good young assets and draft picks, Zion’s a once-in-a-generation talent, so it’s not happening.

With the Lakers armed with enough salary cap space to sign one max free agent to pair alongside LeBron James — as well as any potential trades they may go for; like trying again to land Anthony Davis — the team’s front office will do anything it can to avoid another terrible season like this one. Unfortunately, Paul Pierce thinks that it’s going to take a helluva lot to even get that done, so be prepared, Lakers fans, because this may take awhile.