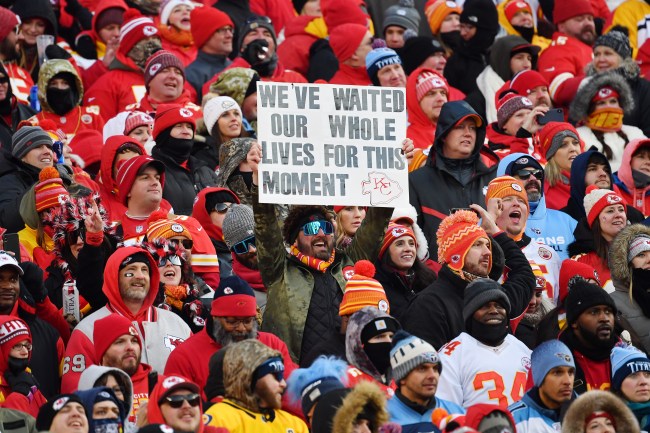 The Kansas City Chiefs punched their ticket to the Super Bowl for the first time in 50 years after beating the ‘Dynasty Killer’ Tennessee Titans 35-24 in the AFC Championship. For the second week in a row, the Chiefs found themselves having to claw back from an early deficit in the playoffs after falling down 10-0 to the Titans.

But Patrick Mahomes was able to connect with Tyreek Hill for two touchdowns and he scrambled for another TD before halftime and the Chiefs never looked back from there. Now, they’ll face the San Francisco 49ers who are an early 1-point favorite according to the oddsmakers in Las Vegas.

Paul Rudd and Modern Family‘s Eric Stonestreet are two of the most famous Kansas City Chiefs fans out there along with Jon Hamm and the two were having more fun celebrating the Chiefs’ win than any other fan in the stands. I’d say it’s primarily because they’re A-List celebs who didn’t have to stay in the stands with the rest of the fans. Instead, they were able to party on the field with the players and live out every diehard fan’s dreams.

The two fans have been given access to the team throughout the season. It’s great for the fanbase to be able to rally around these A-Listers. Here they are going through all of yesterday’s celebrations…

Before the game (h/t For The Win):

Is anyone more fired up than Paul Rudd and @ericstonestreet? 🔥

During the post-game celebrations, on the field, taking in the moment with the players:

Watch: Paul Rudd and Travis Kelce share a moment after the #Chiefs won the #AFCChampionship

The Chiefs caused Paul Rudd to live his own meme pic.twitter.com/09kxOh7VqB

If you’re going to be there Sunday, this is the required energy. #LetsGo #ChiefsKingdom @Chiefs pic.twitter.com/9PYXoV2zXS

I am EVERY @Chiefs fan in this picture. I get to do crazy things and I NEVER forget how lucky I am. Brett told me many times this season that this moment WOULD happen. He was right. Thank you all @Chiefs organization and players for all your hard work. #1moretogo #ChiefsKingdom pic.twitter.com/Evc8klBUj3

Eric Stonestreet looking like Andy Reid’s mustache fell off during the celebration pic.twitter.com/NB2M3OYGu9

Paul Rudd and Brett Veach and Eric Stonestreet having the time of their life. #Chiefs pic.twitter.com/PRAuCqwZ8W

The Chiefs are going to the Super Bowl! Eric Stonestreet already has hat on. #ChiefsKingdom pic.twitter.com/mJp54oakYA

Eric Stonestreet is every fan ever right here.

The Chiefs are currently 1-point underdogs to the San Francisco 49ers for the Super Bowl in Miami. I’m still torn on whether or not I’ll drive over to Miami for the festivities.

I missed last year’s (boring AF) Super Bowl in Atlanta despite having a ticket because my wife dragged me to one of those childbirth preparedness classes that expecting parents are all expected to take. Which is fine in hindsight because the game was boring and now I’ll be able to hold that over my son’s head his entire life anytime he gives me sass. “You don’t want to run errands because they’re boring? I missed the Super Bowl for you, you little jerk.”