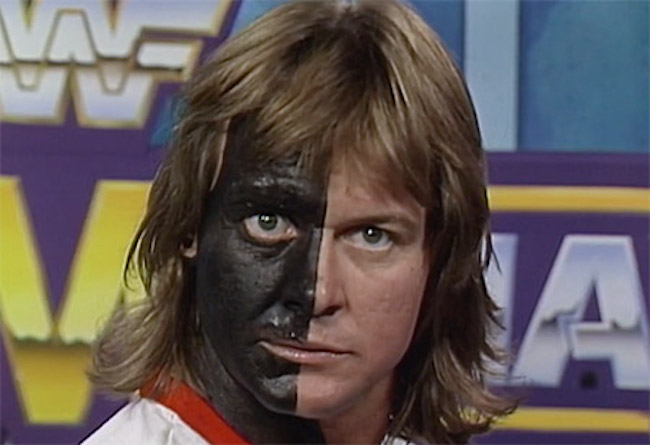 The WWE Network making the jump over to the Peacock hasn’t been the smoothest transition.

For example, the first WWE PPV to stream on the service, Fastlane, had delay issues and a slew of content isn’t available yet.

Perhaps the delay in moving the robust WWE library over to the NBC app involves Peacock standards and practices going through the WWE material with a fine-toothed comb and editing out any questionable material.

According to PWInsider, the Peacock has already edited several older WWE programs that “have not aged well” since originally airing.

The match between “Rowdy” Roddy Piper and Bad News Brown, in which Piper painted half of his body black. A promo by Piper, half in black face, was also removed from the show.

The angle and idea have long been considered a black eye – no pun intended – on the company and Piper’s legacy.

Both Piper and Brown discussed the angle in shoot interviews with Brown stating that Piper was a racist and Piper explaining the idea for half black face was his idea as a way to promote races getting together.

The second controversial moment involves Vince McMahon himself dropping the N-word at Survivor Series in 2005.

McMahon uses the racial slur in a “friendly” way while talking to John Cena. Booker T is within earshot and, well, here’s what happened for those unfamilar.

The segment has been edited out of the show on the Peacock.

While I absolutely agree that both of these segments are ridiculously offensive – and the ideas probably never should have seen the light of day – to completely erase them from the WWE shows seems pointless.

In fact, the second instance of McMahon using the N-word demonstrates that white men, UNDER NO CIRCUMSTANCES, should use that word. Especially when Booker T, a black man, gets offended immediately.

It will be interesting to see what gets wiped from the network over the next six months to a year. At this rate, most of the 1980s and a bulk of the footage from the territories will likely get scrubbed.