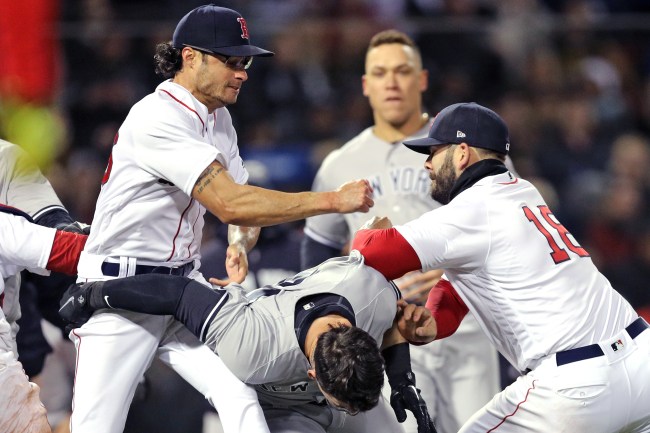 Benches clear, punches thrown in Yankees-Red Sox after Tyler Austin is hit by a pitch from Joe Kelly. pic.twitter.com/wvqoak8QMV

The two players were ejected along with Yankees third base coach Phil Nevin.

The pitch was in retaliation for Austin’s late, spikes-up slide into second base in an attempt to break up a double play. The slide caught Red Sox shortstop Brock Holt in the calf area, infuriating Holt and the Red Sox.

Red Sox legend Pedro Martinez was involved in the most ratchet rivalry fight in history when he flung a 72-year old Don Zimmer to the ground back in the 2003 ALCS after he threw at Karim Garcia. The three-time Cy Young Award winner took to Twitter to evaluate the brou-ha-ha.

Pedro’s biggest gripe was that Kelly should have thrown at Austin sooner.

The only thing I would had done different than Joe Kelly tonight, is I would’ve hit Tyler Austin at his previous at bat. Other than that, Kelly executed perfectly #YankeesvsRedSox

Sliding with the cleats up is a no-no in baseball. That means fight fight fight! #YankeesvsRedSox

We’re babying the game way too much nowadays.

I’ll never forget where I was when I saw this…