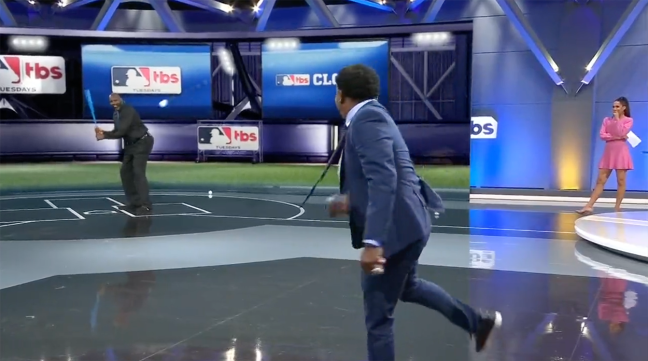 Shaquille O’Neal is not very good at shooting free throws, but he might be even worse at hitting a baseball. He struck out on four nasty pitches from Pedro Martinez on Wednesday, which is a sentence that almost doesn’t seem real.

As the NBA Playoffs and MLB regular season crossover this month, the Turner Entertainment Networks are jam-packed with sporting events. In turn, the two studio shows have had a lot of crossover of their own.

On Tuesday, the (literal) biggest talent from Inside the NBA walked over to the MLB on TBS studio and tried his luck at the dish. It didn’t go well for him.

Shaq stepped up to the plate against against a three-time Cy Young Award winner with a wiffle ball bat in hand. Across from him, Martinez stood at the mound with three balls at his disposal.

The first pitch resulted in a sword for strike one. Pitch No. 2 had Shaq swinging for the fences for strike two.

After an adjustment from Lauren Shehadi, Shaq wore the third pitch at his ribs for a free base. He chose not to take the bag and dug back in with a 1-2* count.

And then he got a hold of one. But it went foul.

On the final pitch of the fake at-bat, Shaq went down swinging on a nasty breaking ball inside. It was an incredible exchange that led to incredible television.

The matchup you never knew you needed to see. 😂pic.twitter.com/lVrJrYRvsU

Needless to say, baseball is not in Shaq’s immediate future. However, with some time and practice, he could probably take Martinez way deep if he was ever to connect with the barrel. Just not this time.