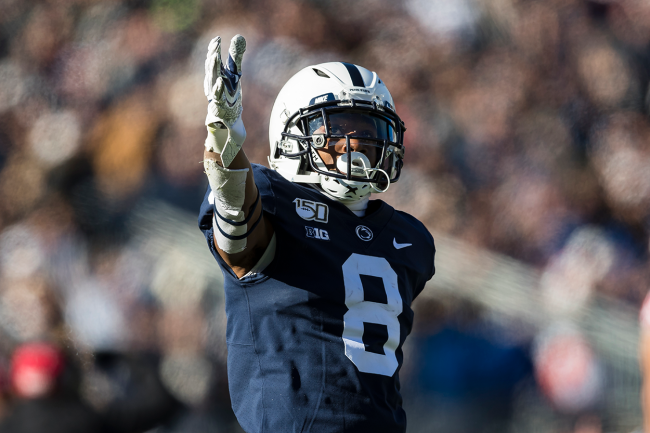 Marquis Wilson was a three-star recruit in the Class of 2018 who is playing well above his rating. As Penn State football looks ahead to the fall, the Connecticut-native is going to be a crucial component to its success on the defensive side of the ball.

Listed at 5-foot-11, 178 pounds, Wilson is not the biggest player on the field. That didn’t stop him from making his presence felt during practice on Wednesday.

During 1-on-1 drills, Wilson lined up against wide receiver Parker Washington, who burst onto the scene as a freshman in 2021. He will be the team’s starting slot receiver this fall and is poised for a breakout year. Fortunately, Wilson will not be guarding him during the regular season because he got got.

After the ball was snapped, both Wilson and Washington broke down the sideline with the latter getting a step on the former. As the throw came in, Wilson caught up and stuck out his right arm.

In most cases, the DB would have deflected the pass and kept the WR from making the catch. Wilson took it one step further and made the most casual, craziest interception of fall camp— at least, thus far. Take a look:

The play was so impressively casual that even Wilson’s teammates took a moment to register what he did. They didn’t go nuts, but the oohs and aahs and “damns” made it very clear that they were all left speechless.

Wilson’s pick was ridiculous and he did it so smoothly that it didn’t get the love it deserved. Imagine if he had made that catch in the middle of a one-possession game during the third quarter of a sold-out home game in Happy Valley. It would have been pandemonium.