Penn State Tackle Rasheed Walker Had The Most Savage Block Of The Season, Maybe Ever 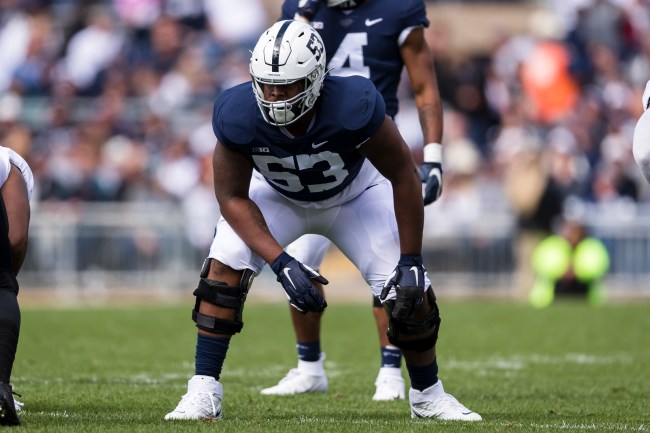 Penn State football finds itself in an unfamiliar place at 0-3 to begin the 2020 season after falling 35-19 to Tua Tagovailoa’s brother Taulia and Maryland on Saturday. It was a bad loss with very little to build on, except one particular play from offensive tackle Rasheed Walker.

Lined up against a four-man front, the scheme is designed for Walker to block down on the Terrapins’ four-technique. The ball is snapped and the defender hops up off-balance and gives the leverage to the 6-foot-6, 310-pound lineman across from him. Walker fires off the ball and stays low, driving his legs with a wide base until his man ends up on the turf. Big Uglies are taught to play through the whistle and drive through the ground, but Walker took his pancake block to the next level. With the defensive end under him, he gives a continuous hip thrust that would put Johnny Sins to shame. Some might call it a “teabag,” or a “hump,” if you will.

Hey guys, I know the Terps won Saturday but my lil brother @Cin5oTre3 had the most disrespectful play of the game😭

The play ended up being insignificant in the grand scheme of things, as the Nittany Lions could not get anything going on either side of the ball and lost, but Walker has cemented himself into the College Football Hall Of Fame for ruthless offensive lineman.

Penn State will look to pick up its first win of the season against Nebraska this weekend, and probably should. Meanwhile, Maryland will be tasked with stopping No. 1 Ohio State and Heisman Trophy contending quarterback Justin Fields and is set to lose on paper.