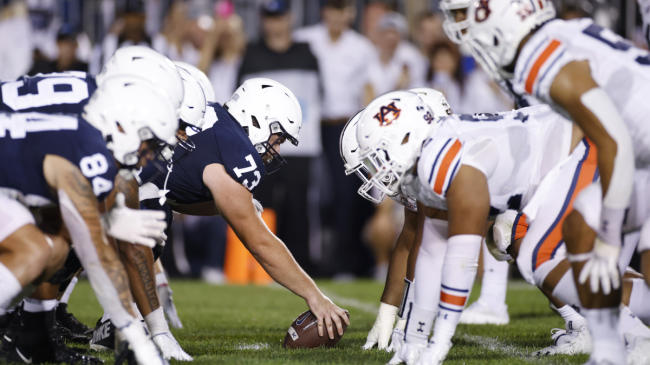 Penn State is reportedly having some issues getting into Auburn for its Saturday matchup against the Tigers.

The Nittany Lions were expecting to fly into the Montgomery airport in Alabama, but some recent construction issues are forcing them to change course. Now, it’s expected they will fly into Columbus, Georgia then take the hour-long bus ride to Auburn. They also haven’t been able to make hotel adjustments.

While it’s just a slight change of plans, it’s not the ideal situation to be dealing with during the week of the game.

The Montgomery Regional Airport is undergoing runway construction right now, so apparently Penn State can't fly in there. It's too late to switch hotels, so they're looking for solutions. Flying into Columbus could be one option, or getting permission to land at Maxwell AFB.

The runway is reportedly being worked on at the Montgomery airport, shortening the available landing area and making a potential arrival a bit riskier for the Penn State football team.

it's technically open, but since the runway is under construction, it's up to Penn State to accept the risk with flying into the airport, which they aren't going to do https://t.co/gqWBRpVFzS

While the circumstances are likely coincidental, many are blaming the Auburn Tigers for being behind the mess, and for good reason.

Before an 1896 matchup with Georgia Tech, Auburn students played a prank that would have a major impact on the rivalry. Students greased the railroad tracks near the stop where the Yellow Jackets were scheduled to unload.

The grease caused the train to skid five miles past its intended location, forcing Georgia Tech players to walk the distance back to the station. Here’s more from a 2013 USA Today article.

On the night before the Yellow Jackets were set to arrive in Auburn for an 1896 game (yes, 1896), Auburn students greased the train tracks leading in and out of the local station. When Georgia Tech’s train came into town, it skidded through town and didn’t stop for five more miles. The GT football team had to make the trek back to town, then went on to lose, 45-0.

After learning about the prank, Georgia Tech cancelled the game for the following season.

Fans are now joking that the Tigers have found a way to interrupt a new mode of transportation.

GREASING TRAIN TRACKS, SHUTTING DOWN LOCAL AIRPORTS, IT NEVER STOPS WITH THESE HOOLIGANS IN AUBURN https://t.co/J6uiyPWOaA

Others aren’t trusting the timing of the construction, either. After all, last week’s opponent San Jose State likely had to use this airport just a few days prior. Definitely interesting to see the repairs scheduled with Penn State coming to town.

Please tell me some Auburn booster scheduled this so Penn State would be screwed https://t.co/jyMNulswyJ

People made jokes about Texas sabotaging the Austin airport to stop Bama from showing up, but Auburn may really be up to something here https://t.co/WJzUT07Yhm

Now, this likely won’t have any effect on the outcome of the game, and there’s a high probability that this was regularly a scheduled maintenance issue. But you can bet some Nittany Lions fans will be pointing to this if they drop the matchup in Auburn this weekend.