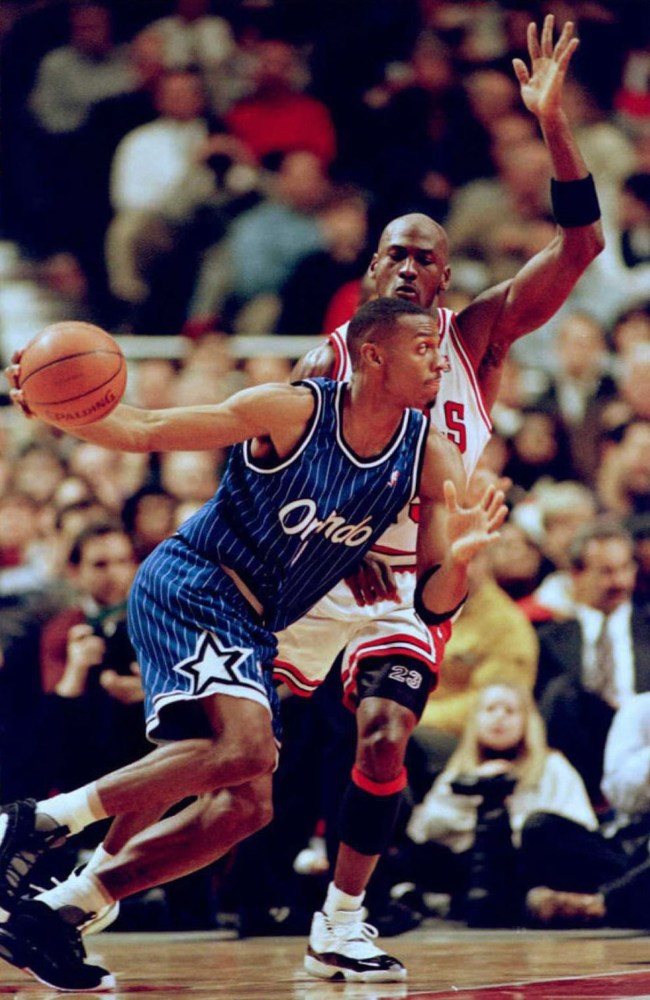 Anfernee Hardaway, AKA Penny, is another one of the many basketball stars who Michael Jordan and the Jordanaires stopped from achieving the goal of winning an NBA championship.

Even when his Orlando Magic, with Shaquille O’Neal manning the pivot, and after defeating the Bulls in the Conference Semifinals in the year Jordan returned to the league for the final 17 games of the season after playing baseball, could not win an NBA title. Of course, he isn’t alone. The Magic haven’t won a single NBA championship since the franchise entered the league in 1989.

So Hardaway, now the head coach at Memphis, knows all too well, first hand, just competitive Michael Jordan is.

During Game 3 of that 1995 Eastern Conference Finals versus the Bulls and Jordan, His Airness tried to send Penny a message by wearing a pair of Hardaway’s signature Nike Air Flight One sneakers – the only time he ever wore anything other than an Air Jordan shoe in an NBA game.

“Michael definitely is (overdosed) on competitive nature,” Hardaway said in a recent press conference. “He’s always having to compete in every single thing he does. He lives for speed. He lives for the competitive nature. He’ll bet everybody in the (golf) group on every single thing. ‘I bet I can drive it farther than you. I bet I can hit it closer to the hole than you. I bet I can make this putt, $10,000 to your $1,000.’ I mean, that’s just who he is.”

Hardaway, who has been watching The Last Dance along with NBA fans everywhere, says there have been several times he has been surprised by what he’s seen in the series.

“The second thing was the relationship with Scottie, Michael, and Jerry Krause. How they just were on him all the time. That’s very unusual. You don’t do GMs like that.

“And the third thing, Dennis Rodman’s vacation that he took during the season that was supposed to be for 48 hours. You don’t even get a day, but you got 48 hours and five days later, Michael Jordan has to come and get you from a hotel in Vegas. That’s absurd. And then, they were still winning. Crazy.”

Earlier this month, Hardaway spoke to ESPN about how when Michael Jordan retired he thought the NBA was now his for the taking. Wrong.

“We were all fans when we go to the league,” he said. “When we got there, he wasn’t in the league. He came back and I was kind of like, ‘I’m the big dog.’ … Michael is Michael, but he’s going to have to show me.”

After Jordan came back, Penny said, “But quickly, playing the Bulls… you could just tell he was rusty, but you could tell he was a bad dude, man.

“The respect was always there, but my thing was, you have to attack him before he attacked you, but all we did was piss him off. Once he got that year under his belt, and got his feet back wet, he went right back into pit bull mode and [laughs] it was over.”