Toni Kukoc Reflects On Being Jerry Krause’s Personal Project, How The Bulls’ Stars Treated Him 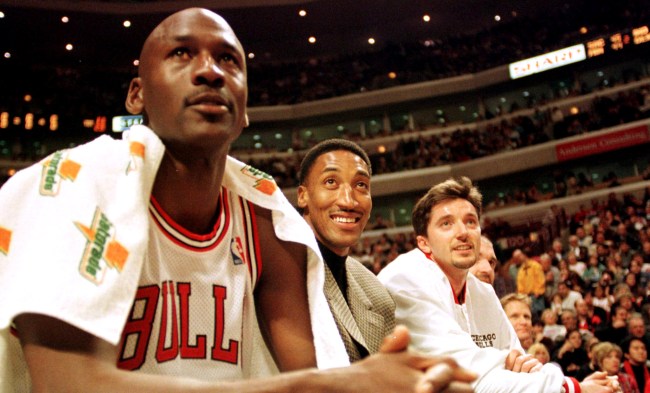 Steve Kerr, one of the key members of the Chicago Bulls teams featured in the ESPN documentary The Last Dance, has, along with Phil Jackson, Dennis Rodman, Michael Jordan and Scottie Pippen, been featured in promotional material for the series.

However, he thinks instead of him being in the ads, it really should be Toni Kukoc.

“I’m almost embarrassed, I see these graphics for the Last Dance, these promos,” Kerr said on The Lowe Post podcast. “And they have Michael, they have Scottie, Dennis, Phil…and me. You know the ones I’m talking about. And I understand it, the reason I’m on there is because I’m the one who’s famous because I’m a coach of the Warriors, so people recognize me and maybe people wouldn’t recognize Toni Kukoč or Luc Longley or Ron Harper…maybe their faces wouldn’t mean as much to a young generation because this was 22 years ago, but that should really be Toni, I think on that photo, on that promo because he was an incredible player.”

Kukoc recently spoke with ESPN’s Zach Lowe and reflected on his time with the Bulls, his relationship with then general manager Jerry Krause and how the team’s stars, Jordan and Pippen, treated him during his time in Chicago with them.

Turns out that Kukoc, like many fans, is finding out about some of the behind the scenes stuff that took place during the Bulls final championship run while watching The Last Dance.

“Phil was good at keeping us in a bubble,” Kukoc told Lowe. “We focused on what was in front of us. By watching, I am going to find out things I had no idea happened.”

Krause, who has taken a pretty good beating so far in the docuseries, should be portrayed more positively, says Kukoc.

“I wish Jerry were here to say his part of the story,” Kukoc said. “It’s easy to like Michael and Scottie and Dennis and Phil, and I like them all. I love them. Scottie was the ultimate team player. Michael will always, to me, be the best player ever. He changed the game. He made it global. Every player today should tip their hat to him. But you have to hear the other side. Jerry built the six-time champions. You have to give him credit.”

Kukoc, who was a superstar in Europe, as fans may remember, was initially viewed as “Jerry’s boy” by Jordan and Pippen, who felt Krause lavished more praise on a player who hadn’t played for them yet, than he did on the team’s current stars.

So, they made his life as miserable as they could when he joined the team.

“They always gave him a hard time,” said Jud Buechler.

However, according to then Bulls center Bill Cartwright, “Once Michael and Scottie figured out this guy was really freaking good, they embraced him.”

Pippen has even gone so far as to advocate Kukoc being inducted in the Naismith Memorial Basketball Hall of Fame.

“I love Scottie,” said Kukoc. “The guy that helped me the most those first two years was Scottie. He is so easy to play with. I never really felt [the criticism] was mean. I felt like he was trying to point me in the right direction.”

On just about any other team at the time, Kukoc would have been a much bigger star, and put up even better stats than the 14.1 points, 4.8 rebounds, and 4.2 assists he put up in his seven seasons with Chicago.

“I truly believe if I went somewhere where I handled the ball more, I would have easily averaged 20 [points], 7 [rebounds], and 7 [assists],” Kukoc said. “But I would never, ever change my time with the Bulls for All-Star Games or anything. If people say my numbers aren’t enough for the Hall of Fame, I’m fine with that. Every player would give up anything to be a part of those teams. It was the best time of my career.”

As for who, how, and why the Bulls broke up after their second three-peat, Kukoc says, “That’s trivial. We made everyone happy. That’s the part I like to remember. And every once in a while, when it’s rainy and cold, I can get on YouTube, and watch, and reminisce about the old days.”