Here Are The ‘Real’ Stories Behind The Pistons Not Shaking The Bulls Hands In 1991, Isiah’s Beef With MJ 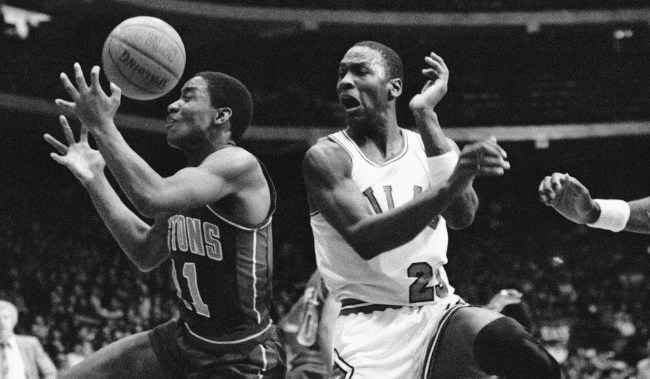 It’s been almost 30 years since the Detroit Pistons lost the Chicago Bulls in the 1991 Eastern Conference Finals. Which, as we have seen from both The Last Dance and the fallout that followed, time has in no way healed those wounds… on either side.

Many reasons for the hatred between the two teams have been given over the years, as well as stories attempting to explain the animosity between Michael Jordan and Isiah Thomas.

None of them were apparently accurate, however. At least if you believe two stories now making the rounds in the midst of all The Last Dance drama.

Former Pistons (and later Bulls) player John Salley claims Thomas’ issues with Michael Jordan actually began when he paid a visit back to his hometown of Chicago one day.

According to Salley, “Isiah goes home, and his nephew is wearing a Bulls jersey, a Michael Jordan Bulls jersey. He said, ‘Hey, what you doing?’ ‘We in Chicago. That’s my team.’ It’s his nephew. He was not really understanding that the great Isiah Thomas plays for Detroit, we don’t wear that. We wear this. ‘But I’m from Chicago. I’m down with the Bull movement.’ Isiah was mad at that. Not to Michael, personally. In his brain, ‘Every time I play against this dude, I’m gonna try to go off so my nephew sees this is the jersey you should wear.’ Never at Michael.”

Salley also gave his version of why the Pistons walked off without shaking the Bulls hands in 1991.

Meanwhile, Vincent Goodwill of Yahoo Sports says the “real” reason the Pistons didn’t shake the Bulls’ hands after being eliminated from the NBA playoffs is because of something Jordan told the press between Games 3 and 4.

Jordan and the Bulls appear like the more mature bunch in the way it was framed, but the Jordan-sanctioned documentary misses a very important point that led to the walk-off.

“The Pistons are undeserving champions,” Jordan said on the day between Games 3 and 4 in Detroit in 1991. “The Bad Boys are bad for basketball.”

In that moment, Jordan reduced the Pistons to thugs, not as champions who had to plow their way through the toughest road in a golden era. Sure, Jordan shook the Pistons’ hands in the years before, but his words invalidated those actions.

“The Pistons are undeserving champions.”- words Michael Jordan said in 1991 before game 4 of Pistons-Bulls, creating the walkoff: https://t.co/Ca4Q19eyH9 pic.twitter.com/jCv9xl53pw

And then there was Salley, on yet another show, dishing out even more inside information on the rivalry between Chicago and Detroit back in the day.

One thing is for certain, the men involved in this rivalry are never, ever going to forget it.