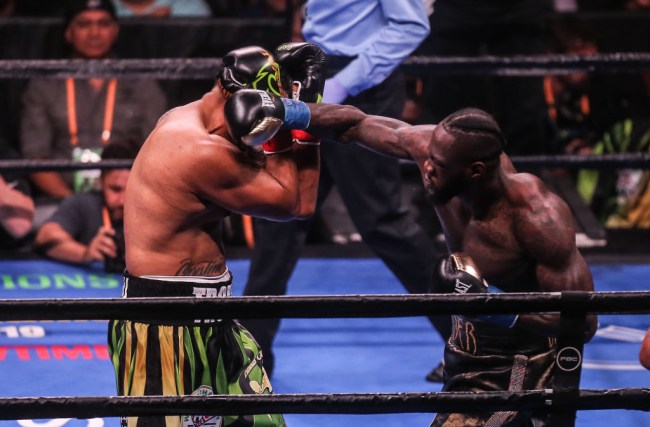 Even if you’re someone like me that knows next to nothing about the sport of boxing, the one thing you do know is that Deontay Wilder hits hard.

This is a man that is undefeated in 43 matches and has knocked his opponent out a whopping 41 times during that stretch.

Just last May, in an interview ahead of his tilt with Dominic Breazeale, Wilder said Breazeale’s ‘life is on the line’ when he steps into that ring. Wilder went on to knock him out in the first round with one of the most ferocious punches ever seen.

With that being said, there is still a group of regular people just like you and me that want to know what it feels like to be punched by Wilder, for some dumbass reason.

Business Insider spoke with Wilder’s longtime trainer Jay Deas and he said that he receives phone calls and letters simply wanting to take a punch from Wilder just to say they did.

“We have people who actually call us and write us and say, ‘I just wanna get hit.’ You know? ‘I’ll sign whatever release, I just wanna say I got hit.’ And I’m like, nope. No, no, no … we can’t do that. You think you want that, but you don’t want that.

“A professional heavyweight rolls with the shots and this takes some of the steam off the shots. So what may look like a great connecting blow, in fact, isn’t, because you’ve turned [your head] a little bit at the last fraction of a second.

“And even the guys who get hit clean, generally speaking, would have taken a little bit off the shot. A normal person doesn’t have that experience or ability and they’d just take it flush, and that would be a horrible thing.”

You have to love those comedic, hardass geniuses out there wanting to get punched by Wilder.

It would take a lot to get me in the ring and take a punch from Wilder. This is really random, but I don’t care if I put on about 8 pairs of pants, turn my back to him and tell him to punch and ass cheek, I’m still out on that.