9 People To Not Invite To Your Super Bowl Party 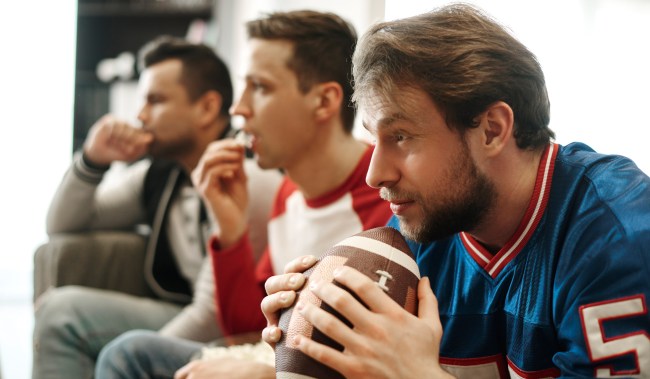 The Super Bowl is almost upon us and with that comes the Super Bowl parties, veritable orgies of booze, chicken wings and, oh yeah, football. If you find yourself hosting one of these bashes this year, there are some things you should know – how much food to pick up, how much booze, and, well, how much booze is really the only important thing, but you also need to know what not to bring to the party, or rather who. And that is where we come in. In order to ensure that your Super Bowl party attains maximum awesomeness, here are nine people you definitely don’t want to invite.

9 The Mooch
No, I’m not talking about NFL Network talking head Steve “Mooch” Mariucci. I’m talking about the dude who shows up empty handed and proceeds to eat all your food and drink all your booze. Inevitably, he’ll also be the one who vomits all that food and booze back up all over your nice white carpet. To be safe, just tell people to BYOB. Sure, it might make you look kind of cheap but screw it, you’re already hosting the party. It’s a win-win – you don’t have to spend your rent check on alcohol for all your deadbeat friends and the BYOB stipulation will weed out the moochers.

8 The Dude Who Doesn’t Understand Football
This guy sucks. Unfortunately, everybody watches the Super Bowl, whether they’re fans or not and that means that you’ll have to put up with this dude as he asks a million questions throughout the game. By halftime, you’ll just be making shit up to screw with him. By the fourth quarter, you’ll be tempted to put a laxative in his beer so he spends the rest of the game annoying the poor toilet instead of annoying you. Now I’m not saying that everybody should be an expert, but come on, at least have a rudimentary understanding of the rules.

7 The ‘Expert’
This jackass thinks he’s qualified to coach one of the teams. In some ways he’s even worse than the guy who doesn’t know anything because this dude just doesn’t shut up. He spends the whole game pointing out every little detail that nobody gives a damn about just so he can prove to everyone how smart he is. And the worst part is that he’s usually wrong. He’s just a blowhard. Newsflash, Vince Lombardi: I’m already seven beers in, I don’t give a shit if the safety should be shading the slot receiver or that you think the offensive coordinator isn’t properly using the backup fullback. Just chill and watch the damn game.

6 The Human Rewind Button
These days most people have DVRs or something equivalent, and that means that there is always one jerk who just has to see a replay of everything and will harass you until you rewind it for him. Meanwhile, you end up missing a 70 yard touchdown bomb – which you then have to rewind to see and it goes on like that until the end of the game, just a constant mess of rewinding just to please one idiot who had to see the replay of the pulling guard getting away with a hold in the second quarter. The only person at the party who won’t want to strangle him will be “The Expert.” One will constantly be asking for a rewind and the other will be diagramming plays with Cheetos on your TV. They are a vicious tag team and the best way to handle them is to just not invite them.

5 The Super-Fan
It’s great to be into the game but in a party atmosphere you want things to be kind of chill, you know? The last thing you want is the diehard fan of either one of the teams spending the whole game screaming at the TV and making everyone uncomfortable. You don’t want to have to run for your life at your own party just because some dude loses his shit and smashes your TV with his shoe just because his favorite team’s quarterback just threw an interception. At best, this guy will be a constant irritant, an embarrassing fountain of rage that will make you look bad by association. At worst, people will fear for their own safety and if you’re going to get the cops called on your party you probably don’t want it to be because one of your guests is filing assault charges. 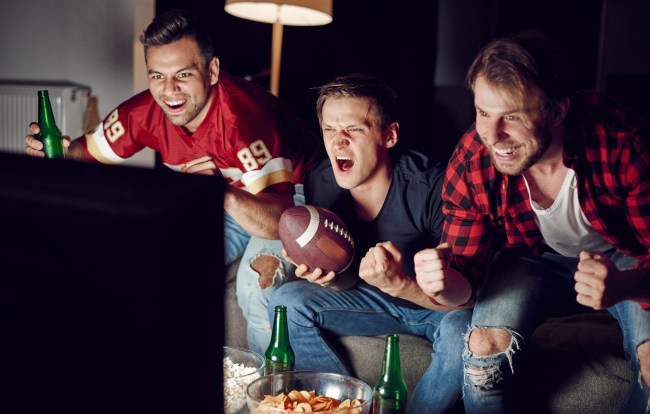 4 The Fantasy Story-Teller
This jerk spends the whole game obliviously gibbering on and on about his stupid fantasy football team, going into obsessive details about his roster and that time he lost by half a point back in week 7 because, get this, the field goal kicker missed! Yeah. And all you can do is nod and smile and hope he shuts up but he never will because he actually thinks you care about these stupid details. The whole game will be filtered through this idiot prism as he explains to you why he had to bench the starting quarterback for one of the teams because he totally thought Michael Vick was due or why the starting running back for the other team totally screwed him by getting hurt back in week six and… see, this is totally boring, isn’t it? You can’t even stand to read this mind-numbing bullshit. Now imagine having to listen to it for four hours straight.

3 The Gamblin’ Man
Much like the Fantasy Story-Teller, this guy watches the entire game through the filter of his own degenerate gambling habit. He doesn’t care about the actual game, he just cares about the point spread, or about the score matching the right numbers he picked at the end of each quarter or… really, there are a million different games the gambling man likes to play, none of them interesting to anyone but him. During quiet points in the game, he’ll regale you with lame stories about the time he just missed nailing that three team teaser and you’ll be tempted to smash his kneecaps just like his bookie.

2 The Chatterbox
This asshole spends the entire night ignoring the game and talking about anything and everything else. Sure, it’s fun to rag on the lame commercials or make fun of Gary from accounting throughout the game, but this guy will start talking about shit that nobody else cares about, like his daughter’s recital or his neighbor’s willow tree, and he’ll keep talking about it even during big plays. To him the game is just a backdrop, and he doesn’t understand that you actually want to watch it. You can make him understand with a quick karate chop to the throat, crushing his larynx, or you can avoid all that messy nonsense and just not invite him in the first place. It’s your call.

1, The Dude Who Only Watches for the Commercials
Sure, some of the commercials are fun, but this idiot will spend all night yammering on and on and on about the poodle farting in the horse’s face in that beer commercial and the rest of the time loudly complaining about how much the game sucks. Incidentally, this is also often several of the people on this list all rolled into one terrible asshole – he’ll drink all your beer, ask stupid questions about the game, scream at the TV, insist that he could coach each team better, make you rewind so he can laugh at some stupid commercial again that only he finds funny, talk about how he has five dollars on the game with his neighbor, bitch about how he can’t understand how his fantasy team finished in last place, try to talk to you about his brother in law’s miniature golfing business during a key moment in the game, and a partridge in a goddamn pear tree. He is the worst.