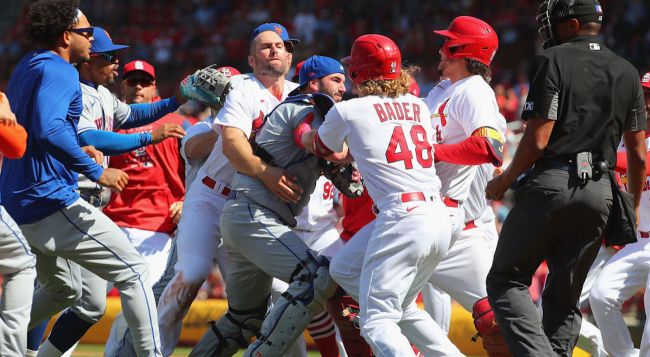 Don’t look now, but not only do the New York Mets have the best record in Major League Baseball at 14-6, but they appear to have that dog in ’em, too.

For whatever reason — whether it be the strategies of their opponents or just random bad luck — the New York Mets lead the majors in hit-by-pitches this year, which has led to quite a few bench-clearing “brawls” at this early stage of the 2022 season.

The Mets’ latest scuffle came in their rubber game against the St. Louis Cardinals on Wednesday, as benches cleared in the bottom of the 8th inning after Mets pitcher Yoan Lopez nearly beamed Cards’ third baseman Nolan Arenado. This came after Mets’ outfielder J.D. Davis exited the game after being hit in the foot. Slugger Pete Alonso was also hit in the head by a pitch on Tuesday night.

Here's that full benches-clearing sequence. You can see Cardinals coach Stubby Clapp throwing Pete Alonso to the ground around the 0:24 mark. pic.twitter.com/sTgo1hyvY4

When speaking to reporters after the game, Alonso — who was particularly involved in the scrap with the Cardinals as he was taken to the ground by Cardinals coach Stubby Clapp — was asked about the incident and said he “understood” how the Cardinals treated him because he’s a “big, strong guy” who could “easily put someone in the hospital.” Well, okay then.

“I thought that was kind of cheap just going from behind. If you want to hold me back, if you want to restrain me, go at me like a man,” Alonso said following the 10-5 loss.

“I totally understand because I’m a big, strong guy. Obviously, the manager wants to have protection for his team and his staff and I totally get it. For me, I’m a big, strong guy and they don’t know my temper and what I could do. If I wanted to put someone in the hospital I easily could, but I was just out there trying to protect my guys.”

"I'm a big, strong guy. If I wanted to put someone in the hospital, I easily could, but I was just out there trying to protect my guys."

Pete Alonso on Cardinals coach Stubby Clapp taking him down during the incident: pic.twitter.com/JxpcvaaTX6

As a Mets fan, I’ve seen plenty of teams over the years start hot, but rarely have I seen them play with this sort of edge. Hopefully, that translates to success when it matters most later in the season.

Unsurprisingly, though, while I may have appreciated the tenacity as a fan of the team, the baseball world at large didn’t take too kindly to Alonso’s strong statement:

Rest In Peace to the guy Pete Alonso fell on pic.twitter.com/U3DK8vDoU2

Stfu you acting like the you didn’t hit Pete Alonso in the head like that couldn’t ruin his career? Also 2 other Mets in the series so far. Arenado didn’t even get hit he over reacted. Y’all gotta stop acting like we are the bad guys. SMWD. Thank you for coming to my Ted Talk. https://t.co/qS6oOD5foc

Stubby Clapp taking down Pete Alonso will be in history books pic.twitter.com/dXGWR89eyD

Our first base coach is an absolute king 👑

Did Pete Alonso actually just say he could put anyone in the hospital if he wanted to right after he got taken down by a 50 year old 5’ 8” first base coach? Something doesn’t add up here. #STLCards #mlb

Be careful out there today. Pete Alonso can put you in the hospital if he wanted to 😭. That was one special interview. #bigandstrong LOL

“If I wanted to put someone in the hospital, I easily could” – Pete Alonso.

Pete Alonso is the Mets version of Cole, constantly putting his foot in his mouth and saying cringey shit. https://t.co/TrWsa4Putg

Just keep winning games, Mets, and you can keep talkin’ like this all you want.