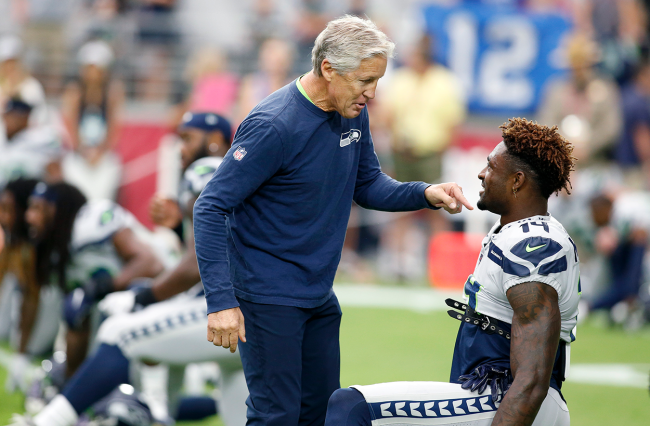 The Seattle Seahawks shook up the entire NFL by trading quarterback Russell Wilson to Denver in exchange for draft picks and Drew Lock. Both before and after doing so, head coach Pete Carroll said that the team had no intention of trading Wilson.

But they did. And now a similar situation might be playing out with D.K. Metcalf.

Metcalf, who is on the final year of his rookie contract, is one of the top receivers in the league. He is 24 years old with a lot of career left.

However, he is going to cost whatever team picks him up after this season a significant sum of money. The market has been crazy lucrative for wide receivers during the current offseason and the talent doesn’t necessarily match the numbers.

For the upcoming contracts, a group which includes Metcalf, the money is going to be massive. Seattle may not be able to afford their former second round draft pick, or may choose not to pay him. Obviously, Metcalf is a superstar at the position, so the Seahawks could also choose to break the bank to keep him in Washington.

If the team does not plan to shell out big money for its top target, there is always the option to trade him.

Rumors have circulated over the past few weeks that the team might be quietly shopping Metcalf, but there has been no open declaration that he is on the block. Nevertheless, one front office in particular has their eyes on Metcalf should he become available. As does almost every organization in the NFL, presumably.

Carroll addressed the idea of trading the 6-foot-4, 235-pounder and said something extremely similar to what he said about Wilson.

#Seahawks HC Pete Carroll said the team “intends” for DK Metcalf to be with them next season.

Carroll used the same word to describe Russell Wilson’s future at the Combine.

Metcalf is entering the final year of his contract and the WR market has 🚀🚀 in the last couple weeks.

This could be a coincidence. It also seems silly to think that Wilson and Metcalf’s situations are comparable, because trading Metcalf — who wants to be in Seattle and has been a consistent, young producer — doesn’t really make much sense.