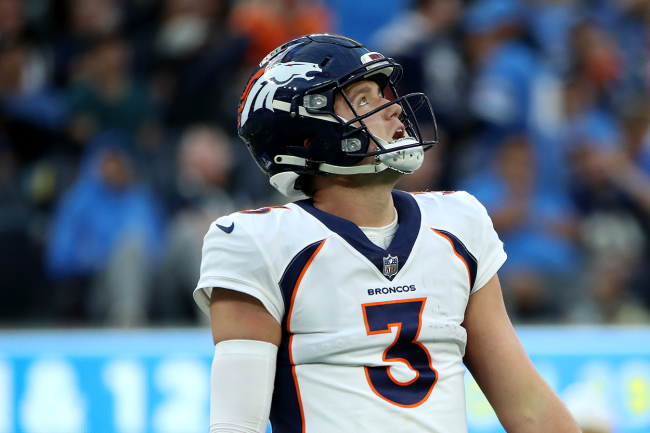 Drew Lock was drafted in the second round of the 2019 NFL Draft and has yet to find very much success in his first three seasons. The former Missouri Tiger has gone 8-13 in 21 career starts.

While the wins and losses may not reflect his talent, Lock led the NCAA and set SEC and Missouri records for touchdown passes as a senior. Now, four years later, the Seahawks are hoping that he can re-find his touchdown touch and return to form with a breakout fourth season in the NFL.

Earlier this month, Seattle sent shockwaves across the league by trading Russell Wilson to Denver. In return, the team received some draft picks and young talent, as well as Lock.

It is unclear what the team plans to do at the quarterback position or if Lock is just a stand-in for 2022, but he is the projected starter as of right now. Should that be what ends up playing out, head coach Pete Carroll does not sound particularly confident in his new signal-caller.

Carroll was recently asked if the Seahawks can win a Super Bowl with Lock at quarterback.

In response, he avoided a definitive yes or no and gave some very serious coach speak about how his team is going to rely on defense and special teams. He also said that the team is going to run the football to “help the whole thing fit together.”

Part of the issue is that Carroll sounds a bit antiquated in his thinking. The game is so offensive-focused these days that there has to be some weapons on offense who can score points through the air. It’s a must.

The other side of what Carroll said is that by saying nothing about Lock, he said everything. He is clearly not particularly confident in his new quarterback to win a Super Bowl.

Here are Carroll’s full comments, which say everything that needs to be said:

(context: @MikeDugar asked if they thought they could win a championship in 2022 with Drew Lock at quarterback) pic.twitter.com/52y25WFnIp