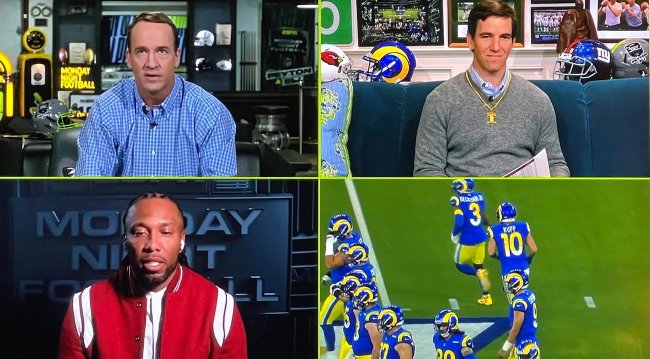 Despite the act that Peyton and Eli have done quite a few Manningcasts throughout the 2021-21 season, some growing pains obviously remain, as Peyton was caught on a hot mic bemoaning the fact that he “can’t hear shit.”

It’ll certainly be interesting to see what ESPN plans for the Manning brothers next year, as the rookie season of the Manningcast was a massive success.

In the Divisional Round, the top seed in the NFC, the 13-4 Aaron Rodgers-led Green Bay Packers, will host Jimmy Garoppolo and the Niners following their upset of the Cowboys, while Tom Brady and the defending champions Bucs will take on the winners of the Rams-Cards matchup.

Meanwhile, over in the AFC, Ryan Tannehill and the top-seeded Titans will host Joe Burrow and the Bengals in Nashville, while Josh Allen and the Buffalo Bills will head down to Missouri to take on Patrick Mahomes and the defending AFC Champion Kansas City Chiefs.

RELATED: Rob Gronkowski Cracking Himself Up While Correcting A Reporter After NFC Wild Card Is Why He’s The Best