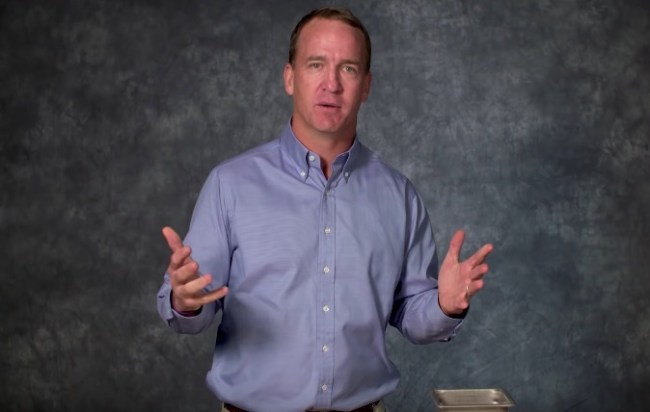 Drew Brees is officially the all-time NFL passing yards leader after last night’s game against the Washington Redskins. Drew Brees was 26-29 and threw for 363 yards, 3 TDs and 0 INTs.

He leap-frogged Peyton Manning into the #1 spot on the NFL’s all-time passing yards list in classic Drew Brees style by throwing a 62-yard touchdown to rookie wide receiver Tre’Quan Smith in the second quarter of the game. When asked about breaking the record on an absolute bomb of a touchdown Drew Brees had this to say “it played out even greater than I ever could’ve imagined.”

The Saints absolutely trounced the Redskins, taking them down 43-19, and Drew Brees threw for a career-best 89.7 completion percentage on the night he became the NFL’s all-time passing leader.

Below, Peyton Manning went on camera to deliver back-handed congratulations to Drew Brees on breaking his passing records. Peyton’s moved to second on the all-time list with 71,940 yards to Brees’ 72,103 yards. Brees was also mic’d up for the game which was a pretty cool aspect to it all.

Cameras were able to catch this cool moment where Drew spoke to his kids about breaking the record, telling them they can accomplish anything in life as long as they’re willing to work hard for it.

On camera, Peyton Manning wished Drew Brees the best on breaking his NFL passing record but also made it pretty clear that the past 1,000-days of being the NFL’s all-time leading passer were the best days of his life and Drew Brees officially ruined that for him and his family. Classic Peyton.

Celebrities, athletes, and politicians all chimed in to congratulate Drew Brees on becoming the NFL’s most prolific passer in history. Some of the greatest quarterbacks in NFL history were the first to speak up.

Congrats @drewbrees, proud to passed by a guy like you. All the best. https://t.co/CMd2G4nTZZ

That was special @drewbrees and doing it with a touchdown! Congratulations

Congratulations Drew! You earned every yard and did it the right way for the right reasons #teamfirst Proud for ya!👍🏼

It’s not a *real record* until LeBron James congratulates you, right?

Salute @drewbrees!! Congrats on the achievement/milestone. Sheesh that’s a lot of passing yards!! 🙏🏾🏈👑

Congratulations to Drew Brees on the all time passing record. Always a class act.

Peyton Manning was born and raised in New Orleans as a Saints fan. That has to at least be a silver lining for him. Despite knowing Drew Brees well over the years, at least it was the quarterback of the team he rooted for his entire childhood that broke Peyton’s record. If anyone’s going to break your record, at least let it be the QB you root for the most, right?