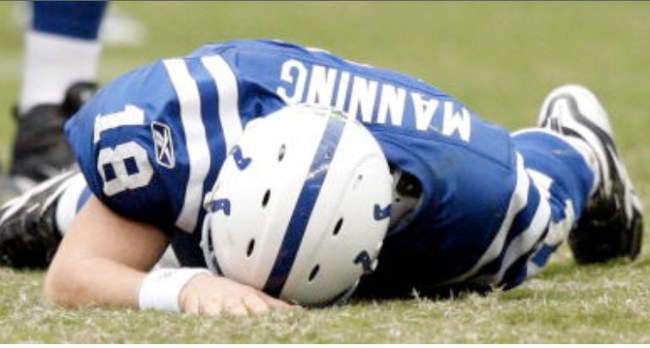 Arizona Cardinals head coach Bruce Arians fancies himself as a quarterback whisperer and his track record supports that claim. The 64-year-old has worked quarterback elites Peyton Manning, Ben Roethlisberger, Andrew Luck, Carson Palmer, among others. And he has some stories to tell.

In his new book, The Quarterback Whisperer: How to Build an Elite NFL Quarterback, Arians tells a juicy anecdote about rookie quarterback Peyton Manning in 1998 begging for mercy against a pre-Brady/Belichick squad that was hammering his Colts. It was just the second start of what would be a Hall of Fame career.

But you never would have guessed Manning would become one of the all-time greats when you hear this story about Manning being a baby back bitch.

During a 1998 game against the Patriots, in only the second start of Manning’s career, the Colts trailed badly. “Midway through the fourth quarter of the game, with the outcome already decided, Peyton was so frustrated that he asked for mercy,” Arians writes. “He wanted to be pulled from the game.”

Arians refused, in a colorful way.

‘”F–k no, get back in there,’ I told him,” Arians explains. “‘We’ll go no-huddle and maybe you’ll learn something. You can never ask to come out. You’re our leader. Act like it.’”`

Arians then describes what happened next as a “sight to behold,” with Manning leading a late drive that ended in a touchdown pass. Arians saw the drive give Manning a “shot of confidence.”

The next year, as Manning tried to break an 0-3 streak against the pre-Belichick Patriots (in those days, the Colts and Patriots were both in the AFC East), Arians noticed before the game that Manning “had a frowning, contorted face” and that “he looked like he really needed to go to the bathroom.” Arians continued to sense that Manning was uptight about facing New England again, so Arians said to him, “‘Peyton, your footwork is all messed up. . . . What’s wrong with you, man?’”

Arians went on to admit that nothing was actually wrong with Manning’s footwork, he just used this to push the right “psychological button,” and his quarterback’s anxiety vanished. The Colts won the game and Arians acknowledges this moment as the “turning point” in their relationship.

Live look at Peyton trying to shrug off getting called out by his former coach….