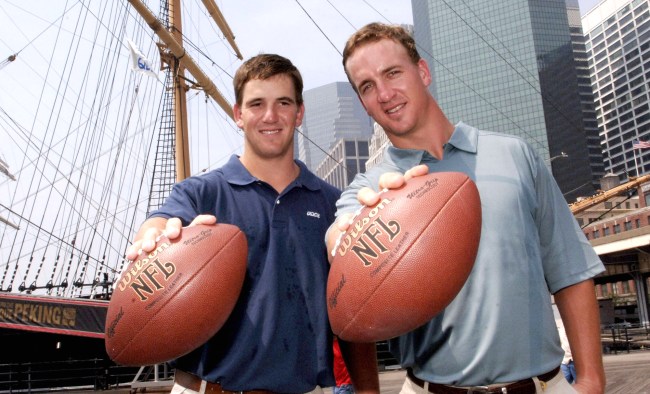 Peyton Manning needs to be in an NFL broadcast booth. He keeps finding reasons for not doing it, but as good as Tony Romo is as a broadcaster for CBS, Peyton Manning has the potential to be even better.

We’ve all seen how entertaining the Hall of Fame QB has been in his numerous commercials, his one bar-setting appearance for athletes as the host of Saturday Night Live, and in his current role as host of Peyton’s Places on ESPN+.

Saturday night, while sitting in the stands in Allen Fieldhouse for the University of Tennessee men’s basketball game versus Kansas on ESPN, Peyton was asked about the possibility of ever jumping behind the mic to call some NFL games. Especially now that one of his biggest excuses, having to be critical of his brother Eli Manning should the occasion to broadcast one of his games arise.

Manning, who has previously been offered broadcasting gigs by ESPN and Fox, was asked if there would ever be a day where we’d see a “brother broadcasting duo” now that they’re both retired.

His response was pure Peyton.

“It’d be so hard to get a word in,” replied Manning. “You know, Eli, we’re always arguing over who’s gonna say what. So I’m not sure the two of us would fit in that booth together. I look forward to doing some fun things with him, in the fall especially ,that we haven’t had a chance to do in a long time. He’s at peace, so I’m happy about that.”

At the very least now that they’re both retired, and we wait for their nephew Arch Manning to be old enough to play in the NFL (no pressure, kid), as Holly Rowe mentioned, the least they can do is grace us with a few more SportsCenter commercials because the one they did do was A++.