Peyton Manning’s Ex-Teammates Spill The Beans On How Insanely He Prepared, And Played Pranks 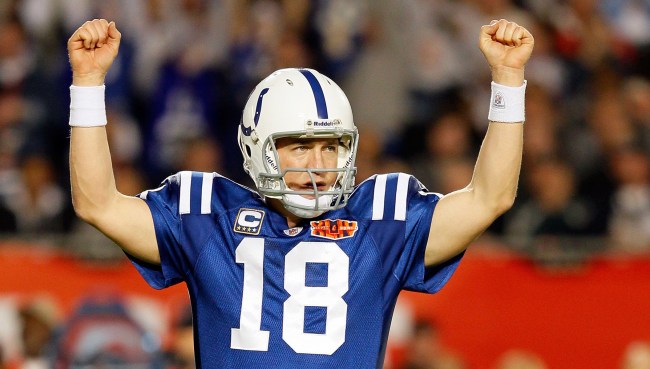 If you’ve been watching the ESPN+ series Peyton’s Places hosted by Peyton Manning, then you have already gotten a little glimpse at what kind of person number 18 is when he’s just hanging around teammates, former opponents, and his family. (And if you haven’t watched it yet, you should. It’s very good.)

It’s little wonder the man has been as successful as he has over the years, in whatever endeavor he’s undertaken. He’s prepared like very few people in the world for whatever he’s doing.

Which is why, this coming Saturday, Manning will be officially elected to the Pro Football Hall of Fame.

To celebrate this occasion, The Athletic hit up some of Manning’s ex-teammates, coaches, and co-workers and asked them to share some stories about Manning that most people have never heard before.

None of them, however, should surprise you.

Jeff Saturday, Peyton’s former center with the Colts, recalled the time as they were getting ready to play the Super Bowl in 2006, that Manning, in front of players’ wives and girlfriends, announced, “Wait, I’m not going to have families on my floor. I don’t want some 5-year-olds knocking on my door in the middle of the night or banging on the walls.”

Needless to say, the ladies were not too thrilled with this idea.

“As you can imagine, the intensity of the room ramped up about 100-fold,” recalled Saturday. “They’re like, ‘You’ve got to say something,’ and I’m thinking, ‘Great, we’re going to have a major disagreement just before going to the Super Bowl.’ But the wives weren’t having it.”

In the end, Manning got a room way down the hall, away from the kids.

MJ ain’t got nothin’ on Peyton when it comes to competitive drive.

Manning’s former teammate Jacob Tamme, however, shared a whole different side of Peyton.

“One time a bunch of us (Colts players) were on a golf trip, it’s like 95 degrees and before I left, my wife was telling me to use sunscreen,” said Tamme. “About the third hole, here comes Peyton getting ready to tee off. ‘Hey, you want some sunscreen?’ I’m thinking, ‘What a great friend, he’s offering me sunscreen so my wife’s gonna be happy, it’s like he knows my wife wants me to wear sunscreen. It’s unbelievable.’

“He hands me this tube and I’m rubbing it on my neck, face, ears, forearms, the whole nine yards, and a minute later I knew it: That was Flexall, for sure. So if you ever play golf with Peyton, do not use his sunscreen. My face was very limber after that. It went from 95 degrees to 195.”

Wide receiver Reggie Wayne, on a visit to Manning’s house, and noticed that Peyton had a theater room that was exactly like the meeting room at the Colts facility.

“It had everything: The projector, the whiteboard, the seats exactly like the ones we had at our facility,” said Wayne. “I’m like, ‘Man, you need to get out more.”

Check out the rest of the stories (there are 18, for obvious reasons), which include several tales of what a really good dude Manning is (shocker), over at The Athletic.