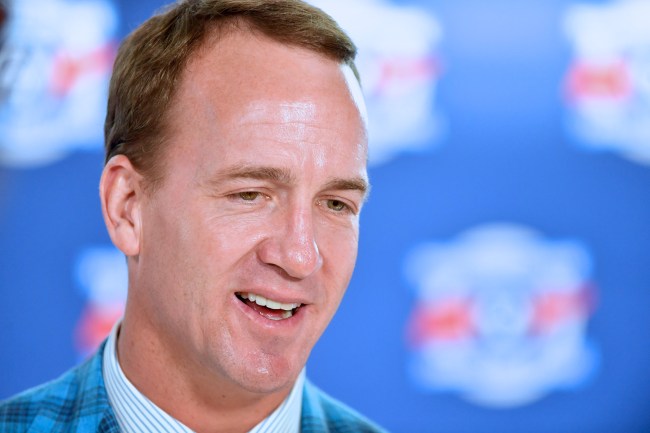 Peyton Manning’s one of the most entertaining people on the planet. Like, just looking at the dude, nobody would ever think that he’s, arguably, the greatest passer the NFL has ever seen. He’s got dad jokes. He’s got a dad bod. He’s got awkward dad written all over him. But, as we all know, there’s more than just meets the eye with Manning, with the two-time Super Bowl champ having one of the greatest football minds ever.

While Peyton Manning has yet to put himself on live TV to broadcast games — which has been a rumor for awhile now, but he’s held off on committing to just yet — he has shown to be quite the personality in front of the camera. From being featured on Detail with Peyton Manning, an ESPN+ show that has him breakdown film, to his new show, Peyton’s Places, which pays tribute to the 100th season of NFL football, as Manning revisits “seminal moments in NFL history through conversations with former players, coaches and other key figures about football history and its cultural impact,” the guy knows how to entertain.

For those who might be interested in seeing Peyton Manning in action, Peyton’s Places, the 30-part documentary, debuts tonight, July 29, with Part 1 available exclusively on the leading direct-to-consumer sports streaming service ESPN+. Parts 2-5 will debut in subsequent months through January 2020. Looking for a little teaser? Check out some behind-the-scenes footage below.

Peyton’s Places goes deep with its coverage, with the ESPN+ show detailing some of the biggest moments, best personalities and all-time legendary stories in NFL history. Here’s a look at just some of the moments Peyton Manning will experience on the new show.

Whether you’re trying to get hyped for the NFL’s 100th season with Peyton Manning’s Peyton’s Places, or trying to get the most intensive sports content at all times, ESPN+ is your go-to spot. Plus, here’s a friendly reminder that ESPN+ is only $4.99/month meaning you can get all the content you want from the sport without committing too much.

With all the sports content a fanatic could ask for, ESPN+ is the premier destination to get in on all the action. Whether it’s Peyton Manning’s Peyton’s Places, Alex Morgan’s The Equalizer, exclusive UFC content, live sporting events or more, no streaming service has it like ESPN+ has it.