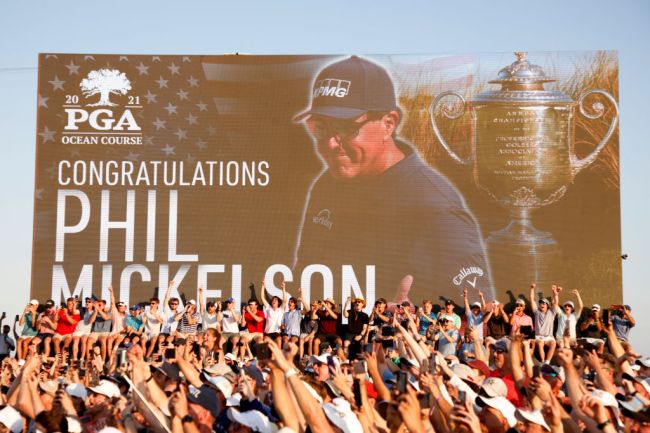 It’s not surprising to see the PGA Championship ratings so high with the sports world intrigued to watch Phil Mickelson make history on Sunday afternoon at Kiawah, but to see the figure the broadcast pulled next to Sunday’s NBA Playoffs ratings is probably eye-opening for some.

Sunday’s broadcast peaked at 13 million followers at 7:00 PM to watch Mickelson become the oldest major champion in the history of the game.

The NBA Playoff ratings, while not bad for the first-round of the postseason, didn’t come close to the PGA Championship’s numbers.

So, if you break it down in the simplest form, yes, Mickelson was a bigger draw than LeBron James and the Lakers on Sunday, by a sizable gab, too.

The argument that Mickelson alone was the only reason so many people tuned into the PGA Championship on Sunday is a valid one. But, a 2.2 million viewer difference between a golf broadcast and the most talked-about athlete on the planet, LeBron, starting a playoff journey with the Lakers seems like a strong sign that people simply aren’t that intrigued with the NBA at the moment.

If you take away the Lakers – Suns matchup, the Nets – Celtics having 3.8 million viewers paints another picture. That 3.8 million number is similar to first-round playoff ratings back in 2019. NBA fandom doesn’t seem to be growing like some in the media are shouting about.

It’s undeniable that politics, the pandemic, and social justice messaging have affected the NBA audience over the last year and counting, and these numbers next to the PGA Championship’s show that there’s a lack of interest.