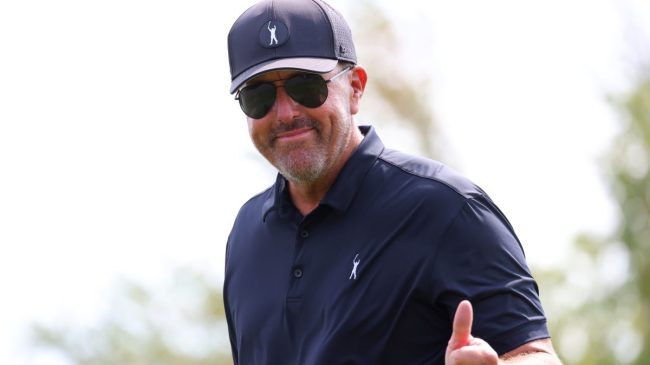 Greg Norman aside, perhaps no one figure has been more central to the animosity between the PGA Tour and LIV Golf than Phil Mickelson.

The six-time major champion was one of the first big names to defect from the PGA Tour and has been outspoken about the tour’s shortcomings. Mickelson’s move opened the floodgates for those that followed him out the door.

Mickelson even claims that some have credited him with major changes that the PGA Tour has made since LIV’s creation. He says that golfers have contacted him to thank him for initiating those changes.

But that wasn’t enough for Mickelson.

Instead, he wanted to both have his cake and eat it too. Which is why he signed his name to an antitrust lawsuit against the PGA Tour alongside a number of other LIV members.

Despite the suit, Mickelson continued to claim no ill will toward the PGA Tour. Now we may know why that was the case.

Phil Mickelson Removes Himself From Antitrust Lawsuit Against PGA Tour

ESPN’s Mark Schlabach reported Tuesday that Mickelson and three other plaintiffs removed themselves from the suit against the PGA Tour.

Phil Mickelson and three other golfers asked to be dismissed as plaintiffs in LIV Golf’s federal antitrust lawsuit against the PGA Tour, according to a notice of voluntary dismissal filed Tuesday.

Talor Gooch, Ian Poulter and Hudson Swafford also asked to no longer be plaintiffs in the federal lawsuit, which accuses the PGA Tour of illegally suspending them for playing in LIV Golf events and using its monopoly power to squash competition.

Mickelson recently addressed the lawsuit prior to a LIV event at Rich Harvest Farms outside of Chicago.

“I haven’t done anything yet, but now that LIV is involved, it’s not necessary for me to be a part of it,” he said. “I currently still am [part of the lawsuit and) I don’t know what I’m really going to do. The only reason for me to stay in it is damages, which, I don’t really want or need anything.”

For all his complaints, it appears Mickelson is now ready to move forward with the next phase of his career.