Phil Mickelson Sat Down With Santa, Brags About His Calves And Abs, And Asks To Be ‘Involved’ In A 2020 Ryder Cup Victory 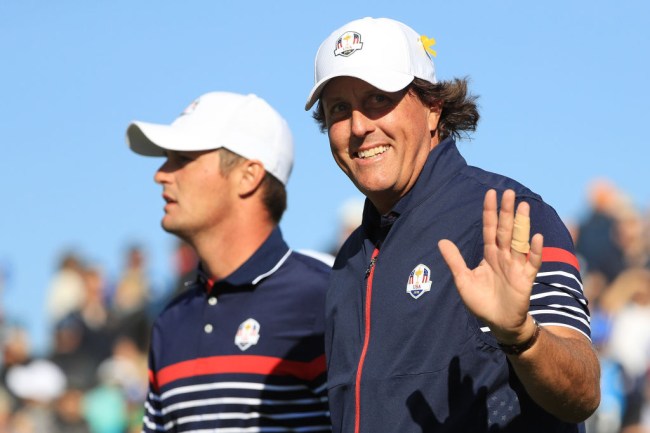 Phil Mickelson was unquestionably the breakout golfer of the year when it comes to social media in 2019. He started his own series ‘Phireside With Phil’ where he’s showed off his calves and body transformation while talking to some of the game’s best and he decided to close out the year by chatting with Santa.

Unfortunately, we didn’t get the image of Mickelson sitting on Santa’s lap, but we did get a few laughs thanks to the topics the two decided to discuss. From Mickelson being on the naughty list to him talking about the 2020 Ryder Cup, he delivered yet again.

It’s not a Mickelson video unless he talks about his calves or abs and he checked both boxes when talking to Santa.

Mickelson wishing for a 2020 Ryder Cup victory for the Americans seems pretty standard, but his wording of wanting to be ‘involved’ in that win is the big takeaway here. Who knows whether he means being a part of the team as a player or assistant captain to Steve Stricker, but it’s interesting nonetheless. Mickelson had a rough go of things at the 2018 Ryder Cup in Paris, which Santa says was because he was on the naughty list.

Why was he on the naughty list? Well, this Santa that Mickelson either randomly found or hired just for this skit says it was because of his actions at the 2018 U.S. Open at Shinnecock.

Wow. I've never seen that before.

Phil Mickelson ran after his putt before it stopped, which is a two stroke penalty.

Damn, that clip never gets old.

I think it’s safe to say that Mickelson will be involved in some capacity at Whistling Straits for the 2020 Ryder Cup, but he’ll likely need to have a strong start to 2020 to make the team as a player. Heading into 2020 he sits at No. 23 in the Ryder Cup rankings for Team USA.

Whether or not his dream comes true, hats off to Phil for a great year on social media.