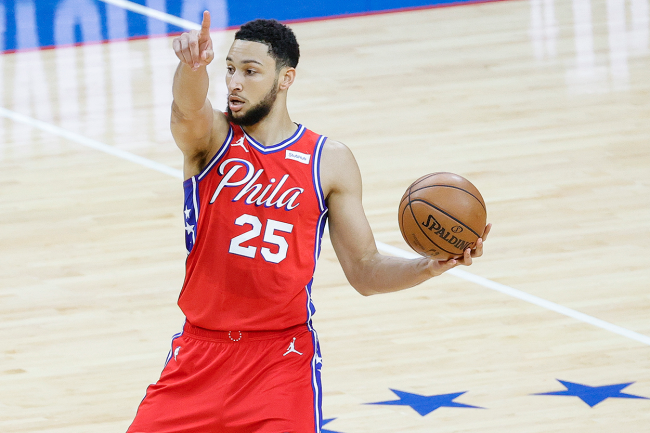 Ben Simmons does not appear to be going anywhere in the immediate future. The 25-year-old point guard wants out of Philadelphia but the 76ers are refusing to trade him for anything less than a truly elite player.

According to a recent report from The Athletic’s Sam Amick, the team has its eyes set on a list of about 30 players in particular. Some of the players that the front office is seeking seem rather lofty.

Here is what Amick had to say:

“As you may have heard by now, Portland’s Damian Lillard is not only on said list but somewhere near the top. Ditto for Brooklyn’s James Harden, the former Rocket with whom Morey tried unsuccessfully to reunite with in January and who, by the way, could come to Philly via sign-and-trade this summer if he decides to shock the basketball world and leave Kevin Durant behind. Also high on the list: Washington’s Bradley Beal. Those kinds of guys.”

Simmons is a good player. The Aussie-native averaged 14.3 three points, 6.9 assists and 7.2 rebounds per game in 32.4 minutes played last season.

Simmons, however, is not a great player.

Beal averaged 31.3 points, 4.4 assists and 4.7 rebounds per game a year ago. While they are stylistically different players, Beal is better than Simmons.

According to Amick, there is an “internal belief that a fair amount of (the approximately 30 players) — let’s say five to 10 — could become available in the next year or two.”

While that might be the case, do the 76ers really believe that Ben Simmons is a more coveted player than Bradley Beal, Damian Lillard or James Harden?

EL OH EL. If they do, I will take some of whatever they are smoking.