The 76ers Taking The Court With SEVEN Healthy Players Is Absolutely Hilarious, Rather Bleak 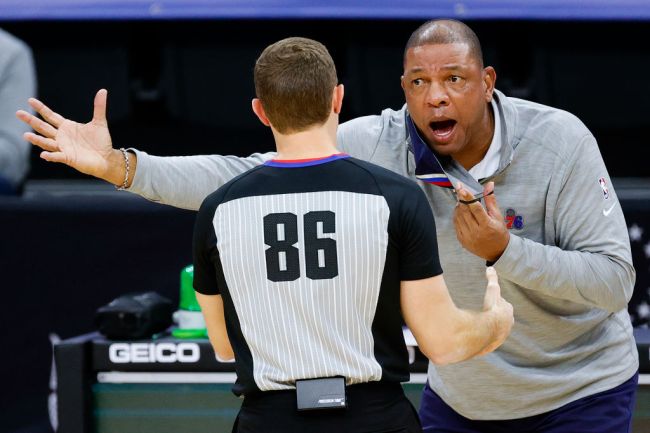 When the NBA shut down after Rudy Gobert tested positive for COVID-19 back in March, there was very little understanding as to what would happen next, but it surely wasn’t promising. Now, almost 10 months later, sports are back but things look a little bit different. Social distanced benches, masks, frequent testing and empty arenas are common place.

After going the “bubble” route to complete the 2020 season, the NBA returned to standard travel and scheduling, but it has not been perfect. The Philadelphia 76ers are one of the handful of teams that have been forced to deal with the ramifications of a Coronavirus outbreak. Seth Curry tested positive prior to Thursday’s game against Brooklyn but was on the bench and near teammates before tipoff. Thus, due to contract tracing and NBA heath and safety protocols, Tobias Harris, Shake Milton, Matisse Tybulle and Vincent Poirier were ruled out. Those five absences came on top of an already thin roster.

Head coach Doc Rivers’ squad on Saturday was without Terrance Ferguson due to personal reasons, Furkan Korkmaz with an injury and both Joel Embiid and Ben Simmons due to continued soreness. To reach the required minimum number of active players, Philadelphia was forced to dress injured forward Mike Scott. He would not play in the game, so the Sixers took the court against the Nuggets with seven players. It was a hilarious representation of the times in which we live.

The seven active 76ers coming out of the tunnel for today’s game is too funny pic.twitter.com/CqtLHuGk8m

Rivers didn’t believe that his team should be playing, but the game continued as scheduled because the eight players were active and Dwight Howard started at point guard. It was a seven-point game through thirty minutes until the Nuggets pulled away in the second half.