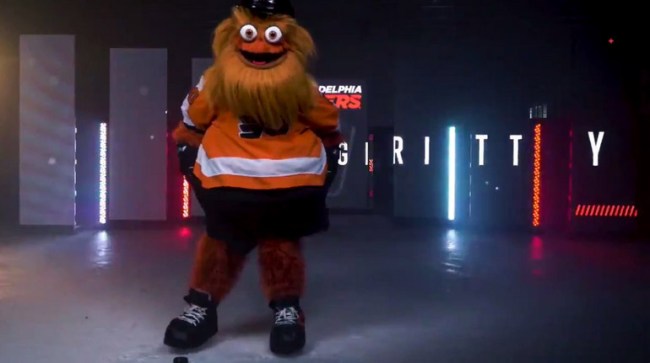 Coming up with a mascot for a sports team can be a tricky thing. Now, if your team is named the Bears or Vikings, it’s not terribly hard, but many teams have names that just don’t lend themselves to a specific mascot concept. Such is the case with the Philadelphia Flyers.

I mean, what the hell exactly is a Flyer anyway? The name was chosen back in 1966 as part of a name-the-team contest. The top prize was an RCA 21″ color television! Other names that were considered were Quakers, Ramblers, Liberty Bells, Bashers, Blizzards, Bruisers, Huskies, Keystones, Knights, Lancers, Raiders, and Sabres. Fans chose the name Flyers because, well, I don’t really know. And I still don’t know what a Flyer is.

So you can imagine how tough it must be to create a mascot that represents the team, right? Perhaps something which conveys speed or flight would be a good choice.

Orrrr they could go with whatever the hell this is…

I guess that makes sense because since I don’t know what a Flyer is, I might as well also not have any idea what Gritty is as well.

His father was a “bully,” so naturally he has some of those tendencies – talented but feisty, a fierce competitor, known for his agility given his size. He’s loyal but mischievous; the ultimate Flyers fan who loves the orange and black, but is unwelcoming to anyone who opposes his team. Legend has it he earned the name “Gritty” for possessing an attitude so similar to the team he follows.

He claims that he’s been around for a lot longer than we know it, and recent construction at the Wells Fargo Center disturbed his secret hideout forcing him to show his face publicly for the first time. He has some oddities that are both humorous and strange. A number of times he’s been caught eating snow straight from the Zamboni machine, and unbeknown to most, his love of hot dogs has been inflating the Flyers Dollar Dog Night consumption totals for years.

That being said, there’s no denying that he’s one of our own.

Might want to walk back that last sentence, because from the looks of social media, NO ONE wants to claim him as their own.

If this thing tries to touch me, I’m launching a beer at its head

You weren’t supposed to feed it after midnight

Kill it before it lays eggs

If I see this thing in the streets I’m probably gonna run it over with my car.

I see no difference between the flyers new mascot and the Babadook pic.twitter.com/WweOUMPYNc

FAN: I think all the fighting in hockey may scare kids.