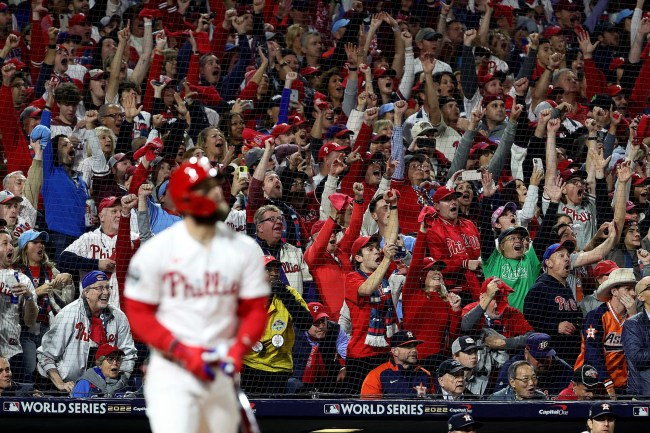 Nothing quite like a father-son baseball moment to pull at your heartstrings.

We certainly got one during Game 3 of the 2022 World Series.

Many sports and country music fans don’t know that Tim McGraw is the son of a bona fide baseball legend. The country singer’s late father is Philadelphia Phillies pitcher Tug McGraw, who helped the Fightins’ win their very first World Series in 1980.

Tug McGraw was famously called up to close the game in the 1980s series, pitching the final out against Willie Wilson and the Kansas City Royals. It’s a championship immortalized by generations of Philadelphia sports fans. When Veterans Stadium closed in 2003, McGraw gave the legendary stadium a final send-off by re-enacting the World Series strikeout, with the late, great Harry Kalas on the call. If nostalgia is your flavor, it’s a goosebumps-worthy performance.

Tug passed away suddenly just a couple of months later. In 2008, Tim McGraw spread a handful of his dad’s ashes on the pitcher’s mound at Citizens Bank Park before Game 3 of the World Series. The Phils won that game and went on to win their second franchise World Series – the team’s first since the 1980 win.

Flash forward to 2022: On Tuesday night, Tim McGraw was back in attendance at Citizens Bank Park for Game 3 against the Astros.

As a tribute to his late father, McGraw wore his father’s baby blue Phillies jersey to the ballpark. A couple of days ago, McGraw posted his dad’s final out at the World Series on his Instagram.

The home crowd went wild when the country singer was pictured on the ballpark’s jumbotron. The Philly crowd roared with a standing ovation:

His dad, Tug McGraw, won a World Series with the Phillies in 1980. pic.twitter.com/8d49mgABoQ

Tim McGraw in the house!!!! pic.twitter.com/TawWK4RphK

What a cool moment.

Unless you live under a cultural rock, you’re probably familiar with the music of country star Tim McGraw. McGraw released hit after hit in the ’90s, including some all-time classics like “It’s Your Love”, “Just to See You Smile”, “Something Like That”, and “Live Like You Were Dying.”

Tim McGraw has spoken quite a bit about his relationship with his late father over the years. Growing up in rural Louisiana, he learned his dad was a Major League Baseball player at age 11. Tug was absent for most of his son’s life until his college-age years, when the two became close.

In 2021, Tim told Esquire that he didn’t resent his father, despite being abandoned as a child.

People ask me, “How could you have a relationship with your father? You were growing up in nothing. He was a millionaire baseball player. He knew you were there, and he didn’t do anything.” But when I found out Tug McGraw was my dad, it gave me something in my little town in Louisiana, something that I would have never reached for. How could I ever be angry?

That obviously shows. It’s pretty darn cool that McGraw showed up in his dad’s jersey to a World Series game.

We can all learn a thing or two from the McGraw family.

What’s in the past is in the past. Forgive and move on. Focus on gratitude, growth, and happiness.

In Tug’s own words: “Ya gotta believe!”