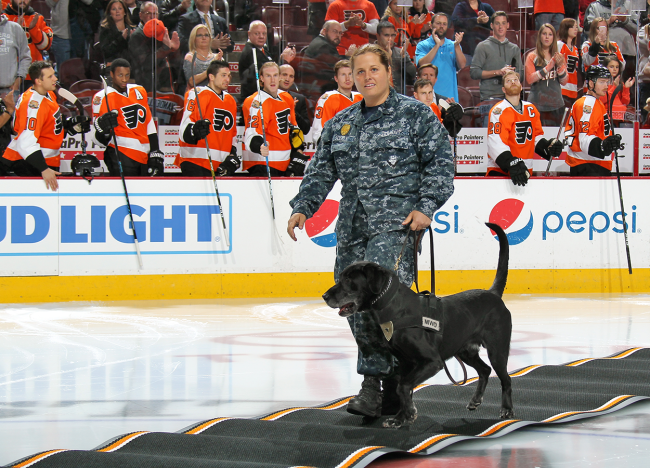 The Flyers are in complete disarray. Although an 8-10-4 record might not look terrible on paper, the team is in the middle of an eight game losing streak and just fired its head coach.

Thus, when a Philadelphia police dog decided to stop and defecate on the logo at center ice, it was a perfect metaphor.

The team hosted a group of police dogs to the Wells Fargo Center on Monday morning. It was an opportunity to salute them for their service, as well as get a great photo because they are each so handsome.

Just a moment to salute them I believe. pic.twitter.com/vMtAQqBy2K

However, as the pups took the ice, one of the six decided it needed to use relieve itself. There was only one problem— it was in the middle of the rink and there was not a viable potty spot within sight.

The dog didn’t care. In a perfect metaphor for how bad the Flyers are currently, it stopped, squatted down, and took a big ole poop all over the logo.

Some Philly police pups were barking as the Avalanche’s J.T. Compher was rehab skating.

Compher greeted them afterward and one of the pups did his business right at the center of the logo.

The officer, who did not appear to have a bag on him, was not quite sure what to do. He stood there uncomfortably while his K9 stopped to discharge feces from his or her body.

You simply can’t write these things any better.

Just hours earlier, the Flyers announced that they fired head coach Alain Vigneault and assistant Michel Therrien. The team’s general manager said he wanted Philadelphia to “forge a new identity” and to “learn to play the game the right way.”

Therrien acknowledged that “it’s a tough day today,” but he hopes that it will mark a new beginning. Meanwhile, police dogs are pooping on his logo.