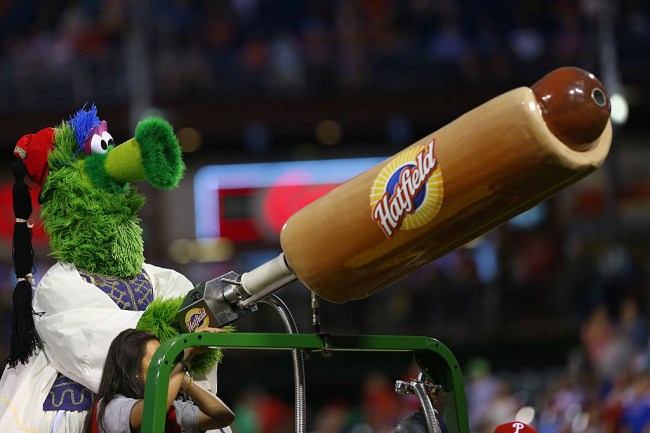 Sports marketing teams spend millions of dollars and countless hours every year figuring out ways to get fans in the stands and keep them entertained once they come through the gates. However, it’s always seemed odd to me that so much effort would go into trying to figure out what fans really want when the answer is incredibly obvious: free shit shot out of a cannon.

Sure, there’s something to be said for the incredibly creative promos minor league baseball teams seem to specialize in, but I can’t even count how many games I’ve attended where one of the loudest cheers of the night is when a few overly-enthusiastic people armed with CO2 guns start firing shirts at in the direction of whoever is yelling the loudest.

The Philadelphia Phillies realized this a few years ago and decided to take advantage by equipping the iconic Phillie Phanatic with a cannon capable of shooting hot dogs far into the stands (it just so happens to bear an uncanny resemblance to the convenience store hot dog Jane Lynch suggestively plays with in Role Models). Unfortunately, the team might be forced to reevaluate things after a fan got drilled in the face by a flying frankfurter during a game earlier this week.

According to ABC 6, Kathy McVay was sitting behind home plate on Monday, a place where you’d typically expect fans to keep their heads on a swivel. Unfortunately, a preexisting shoulder injury prevented her from getting her hands up in time when a duct-tape covered hot dog flew her way, which resulted in her getting hit directly in the face.

Despite some bruises, McVay says she’s basically fine and the Phillies have offered to give her free tickets once she’s feeling up to going to another game. She also acknowledged the humor of the situation, which means I won’t feel bad for posting the most appropriate GIF in the world.