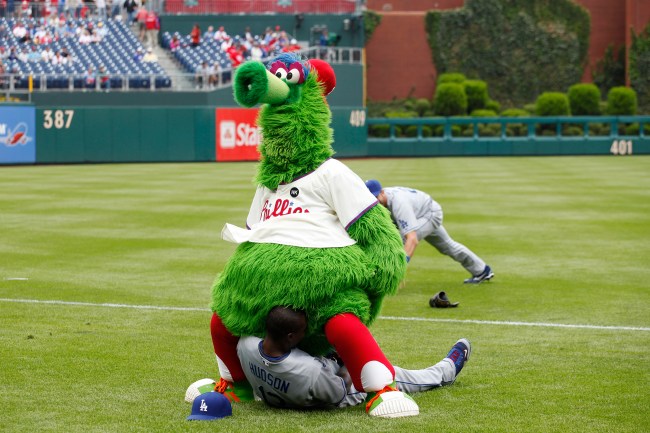 A quick Googling of the phrase “Phillie Phanatic lawsuit” will tell you that this has been a story since August. But similar to the way one man’s trash is another’s treasure, this old news was breaking to me.

The squad and I had quite a night out on Saturday, and as a result, I was asleep by like 9:30 on Sunday, thus meaning I didn’t catch Last Week Tonight until earlier today (in fact, at the time of this writing, I’ve yet to catch up on Curb Your Enthusiasm, either, which apparently shits all over my much-toxic-loved Jets).

And after explaining the current Coronavirus situation in typical Last Week Tonight fashion (I’ll include that video below), John Oliver used the last ten minutes of his show to tell the story of the ongoing and aforementioned Phillie Phanatic lawsuit.

John Oliver Wants to Save the Phillie Phanatic if he becomes a Free Agent (part 1 of 3) pic.twitter.com/O5wan6y1OS

John Oliver Wants to Save the Phillie Phanatic if he becomes a Free Agent (part 2 of 3) pic.twitter.com/IdGzYCNTSE

John Oliver Wants to Save the Phillie Phanatic if he becomes a Free Agent (part 3 of 3) pic.twitter.com/7QvdkVV7yD

The long and short of it is that the company who designed the Phanatic — Harrison/Erickson Inc., a NYC creative company that was hired to design the character in the 1970s — sent a notice of termination to the Phillies in 2018, claiming that they “retained the right to terminate the contract if the Phillies and the company didn’t reach a new agreement by June 15, 2020”, according to Philly Voice.

The Phillies, of course, did not just sit idly by, as they filed a countersuit last summer claiming that “a 1984 renegotiation with the company transferred these rights ‘forever'”

As a result of all this madness, the Phillies have recently unveiled a slightly tweaked version of the character, clearly angling to avoid any potential copyright infringement down the road.

If you didn’t catch it Phillies fans, the Phanatic had a spot on SNL last night pic.twitter.com/vCtMMD9i8M

Harrison/Erickson Inc. may be screwed, though, as Sports Illustrated reports that they’ve obtained contract language that does include the term “forever” in it, seemingly transferring control to the team.

In 1984, Harrison/Erickson assigned all of the company’s rights in the Phanatic to the Phillies for $215,000. Such an assignment was “forever.” Sports Illustrated has obtained a copy of the contract, which is dated Oct. 31, 1984.

In it, Harrison/Erickson “sells, transfers and assigns to the Phillies all of its rights, title and interest in and to the mascot and in and to all reproductions and portrayals of all or part of the mascot in any medium whatsoever, everywhere and forever.” [via Sports Illustrated]

SI did a great job of encapsulating the entirety of the lawsuit, so head over there if you want some actual legal analysis. We aren’t here for that. We’re here because of the sheer absurdity that there is a potential outcome that sees the Phillie Phanatic — the most-sued mascot in baseball — become a free agent. I need to live in that reality. Watch the Mets pick him up. He can be their third mascot behind Mr. Met and Tim Tebow.