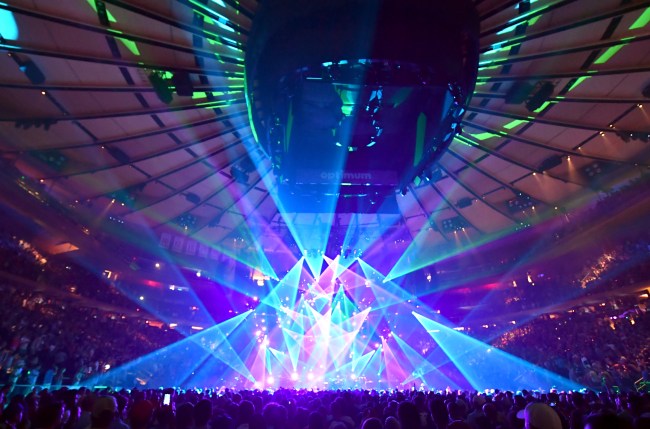 There are three certainties in life: Death, taxes, and the New York Knicks tanking in spectacular fashion.

A fourth certainty, at least for fans of the improvisational rock band Phish: New Year’s run at Madison Square Garden.

The arena has become synonymous with the band’s spiritual home turf over the last 30 years. In summer 2017, the band played 13 consecutive shows with no song repeats at MSG, known as The Baker’s Dozen. Phish earned a banner in the rafters of MSG for the feat.

All things considered, Phish has played Madison Square Garden 64 times, with only Elton John and Billy Joel being the only two artists to play the World’s Most Famous Arena more.

Unfortunately, this year’s string of New Year’s Phish shows was canceled due to a recent surge of COVID cases.

A run of shows in April 2022, where tickets from the Phish New Year’s run will be honored.

According to an official press release, the band and Madison Square Garden officials found a four-night window in The Garden’s schedule.

Phish’s return to Madison Square Garden for the first time since NYE 2019 will now take place April 20-23, 2022, including a three-set show (as originally planned for New Year’s Eve) on April 22.

In order for the arena to remain available for the Phish shows in April 2022, the New York Knicks have to miss the NBA Playoffs.

It seems like Phish fans are dusting off their heady chakras to manifest such a fate for the ill-fated Knicks.

This is not great news for Knicks fans, considering that the team actually made it to the First Round of the Eastern Conference last season. They lost to the Atlanta Hawks.

Musician Andy Frasco summarizes the sentiment based on initial information that went viral from a Madison Square Garden official:

Phish taking a 1st hold under a potential knicks playoff game is a flex not a lot of people are talking about. Even Trey and gang don’t believe in the knicks chances for a title run 💀 😂 pic.twitter.com/XLsRt7cLBs

The circumstances led to some good-natured teasing from both the Phish and NBA communities.

I feel so bad for Knicks fans. The way all of #Phish fandom is rooting for y'all not to make the playoffs RN is UNREAL. LMAO.

Knicks / #Phish fans what are you hoping for here? Is this the first time you’re rooting against your band? pic.twitter.com/LsvR2ujVOq

There's about to be a whole lot of Phish fans rooting for the Raptors and Hornets in the hopes of the Knicks not making the play-in tournament lol https://t.co/mv68B4Ims0

Someone even started a @PhishKnicks Twitter account tracking the Knicks chances of missing the NBA Playoffs so Phish can play the room.

There is now a 92% chance that #phish will have Madison Square Garden for their New Year's Run in April. pic.twitter.com/eeuz6o5Szy

Phish fans having a rooting interest in the Knicks not making the playoffs is a nice little early Christmas present I didn’t expect to find under my tree.

Like I needed any more reason to root against the Knicks? #Phish #YEMSG pic.twitter.com/R5qxBTwVik

Feel like @desusnice and/or @THEKIDMERO should have some jokes about Phish rescheduling at MSG on dates that are held for potential Knicks playoff games.

And finally – Otdis brings up an excellent point: Phish has a solid track record of playing in cities where teams win championships. But tanking when the whole fan base is rooting against them?

This is new territory for Phish x sports statistical analysis.

the phish/knicks thing raises an interesting problem given the #stats: at least THREE times in phish history they were performing in the home city of a team in the Big Game and that team has won, but what if phish playing is dependent on them losing prior?