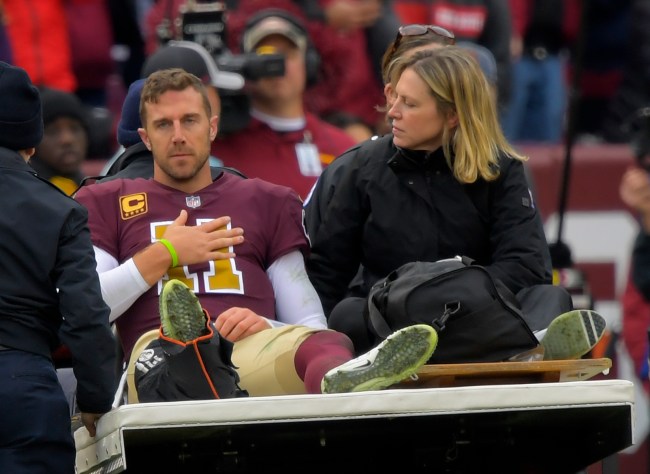 It is not hyperbole to say that Redskins quarterback Alex Smith nearly died after breaking his leg in a game versus the Houston Texans in 2018, an injury that occurred 33 years to the day after Joe Theismann infamously broke his leg for the same franchise.

Smith suffered a compound and spiral fracture to his tibia and fibula in his right leg when he was sacked by Kareem Jackson and J. J. Watt, requiring 17 surgeries and hospitalizing the quarterback for nearly a month no thanks to a life-threatening infection of the blood.

On Monday, a photo emerged of Smith’s leg just four days after the injury that required him to wear an external fixation device on his leg for eight months.

this is the contraption of alex smith's leg

he just came to say hi to the wizards players with his son pic.twitter.com/ucctkajppi

***WARNING: NOT FOR THE EASILY QUEASY***

In a February appearance on Outside the Lines, Smith describes just how lucky he is to be alive after a post-surgery infection permeated his blood.

“Very much lucky to be alive. Very lucky to still have my leg.”

Alex Smith tells @JeremySchaap how his 2018 injury almost cost him everything. pic.twitter.com/z4DQIH1EgY

After the surgery, Smith fell victim to sepsis, a disease that arises when the body overreacts to an infection and causes blood vessels in the body to leak. This can cause cause organs to fail.

Smith says at the time he was ignorant to how many people die per year of sepsis, even in hospital care. The numbers are dreadful. According to The Hill, a study led by researchers at the University of Pittsburgh and the University of Washington schools of medicine found that 1 in 5 deaths around the world is caused by sepsis.

Alex Smith is literally lucky to be alive.

ESPN is airing an E:60 documentary on Smith’s recovery from the leg injury on Friday, here is a gripping sneak peek.

When @Redskins QB Alex Smith broke his leg in 2018, no one thought it would take 17 surgeries to fix. Here’s a look at #Project11 pic.twitter.com/lwcj1l0fV6