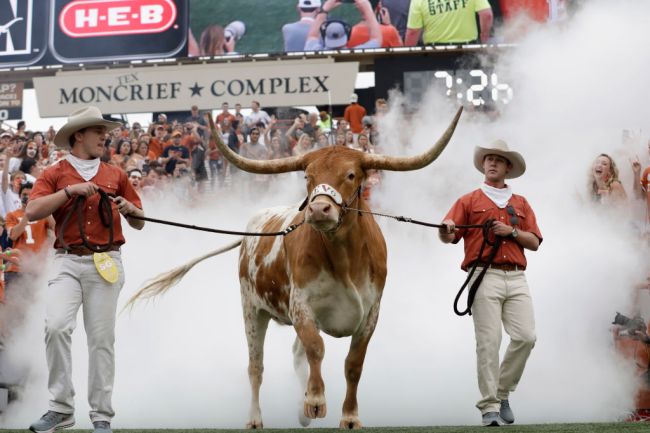 Texas having a live steer on the sideline has always seemed like a pretty bad idea. Sure, it’s cool to see the massive beast known as ‘Bevo’ lead the team out of the tunnel, but then again we’re talking about an animal that weighs well over 1,000 pounds that could do some serious damage to literally anything in its path.

You may recall that ahead of the 2019 Sugar Bowl between Texas and Georgia, someone had the bright idea of introducing Georgia’s live mascot ‘Uga’ to ‘Bevo’ and it turned out to be a terrible idea. The longhorn charged after the tiny bulldog taking out a few barriers and even causing some harm to a few people near the scene.

One of those people standing in the wrong place at the wrong time was Austin-American Statesman photographer Nick Wagner. He was injured and he’s not seeking damages from the mascot’s owners. According to the Statesman, Wagner is seeking between $200,000 and $1 million in damages from the incident.

Wagner actually tweeted photos of his injuries following the incident, but he’s since made his account private.

The petition in the suit stated that those involved “failed to post warnings of danger and intentionally exposed Uga “knowing it would spook him.”

Again, the idea of having a gigantic bull ‘meet’ a tiny bulldog ahead of a football game with dozens of people around them was a bad, bad move.