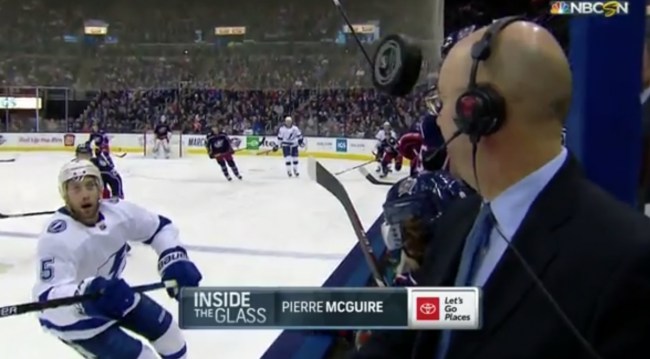 A rinkside reporter was nearly brained by a screaming puck on Monday night. At the NHL game between the Tampa Bay Lightning and Columbus Blue Jackets, NBC Sports hockey analyst Pierre McGuire dodged a bullet.

During the Inside The Glass segment, Pierre was with Blue Jackets players when a puck was smashed towards them. The puck nearly bashed Pierre in the face, coming within an inch of his dome. Thankfully the puck only buzzed the tower and nobody was injured. However, the camera was not as lucky and took a direct hit from the puck.

Piere has the reflexes of molasses on a minus 13-degree night in Saskatchewan. “It’s all part of what goes on down here,” the 57-year-old McGuire said of nearly getting pucked. Somebody get Pierre some new skivvies.