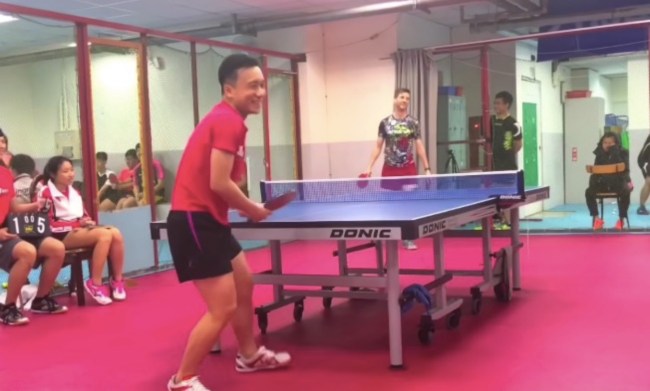 It’s been way too long since we’ve seen a great Ping-Pong clip hit the Internet. I feel like we had a great run there for a few years where a clip would come out over few weeks or months and the sport was receiving a decent amount of attention. I honestly cannot tell you the last time I saw anything related to Ping-Pong until I saw this clip pop up.

The clip is titled ‘Enter the Snake: Twist of Fury’ and it shows International Table Tennis Federation commentator Adam Bobrow absolutely clowning on some of the best players in the world. It’s a supercut of him playing against everyone from club and local circuit players to players ranked in the Top 10 in the world.

This move he’s got, it’s a snake. He gets down real low and throws some crazy action on the ball that sends it flying like a knuckle puck once it gets in the air. The end result is players are left stunned as they completely whiff at these shots, and these are the top players in the world completely fooled.

Deadspin found an old Facebook clip from 2016 where Adam Bobrow explains how this move works. He describes it as a good way to steal a point from a defensive position and not just a cheap parlor trick.

This move has been used in professional competition. At the 2016 Qatar Open, #1 ranked Ma Long used this move against Dimitrij Ovtcharov in competition.

I’ll be honest, I think I could practice this for 6 months and never pull it off successfully. I’m such a piss poor ping-pong player that learning this move might take me a lifetime.