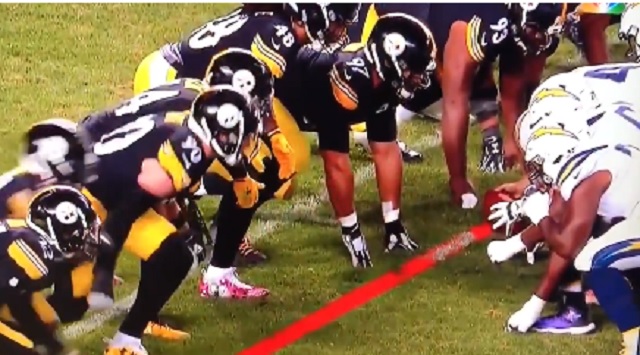 The refs had a long night during yesterday’s Steelers-Chargers Sunday Night Football game.

Not only did the officials miss a blatant false start penalty that resulted in a Chargers TD.

Brutal no call. Clear false start on the RT. Instead, a Chargers TD. #Steelers pic.twitter.com/bg4v0YY4TF

But they also missed an illegal block in the back on a punt return TD.

Don't ignore the block in the back… refs awful tonight… RT @BleacherReport: Desmond King put on the burners and made the Steelers look silly 😮

@NFLOfficiating – No block in the back here? 2nd TD this crew caused by obvious calls that are flat out missed. Embarrassing! pic.twitter.com/l2My62aia7

On the final play of the game, the Steelers were called for three consecutive offside penalties during the Chargers field goal try to win the game. The Steelers were apparently drawn offsides by Chargers long snapper Mike Windt illegally twitching and moving the ball pre-snap during the play in which they blocked the field goal.

Wondered why there was no analysis of the 3 offsides on the game winning FG last night from the broadcast. Here you go. The simulated snap from the Chargers long snapper drew the Steelers offsides 👇👇 pic.twitter.com/syJR9GitSN

The field goal block should have counted due to the illegal snap infraction and the game should have to overtime instead of the Chargers being granted the game-winning field goal
.

Browns linebacker Joe Schobert chimed in on Twitter and confirmed that Windt was notorious for never getting called for illegal snap infractions despite always twitching presnap.

Chargers long snapper is notorious for twitching and moving the ball before he snaps. Pointed it out to refs during our game and was told “he’s been doing it his whole career” it’s not gonna get called. https://t.co/wZTFRJxTx3