P.J. Fleck And His ‘Row The Boat’ Mentality Could Be Heading To The NFL With At Least One Team Reportedly Interested In Him 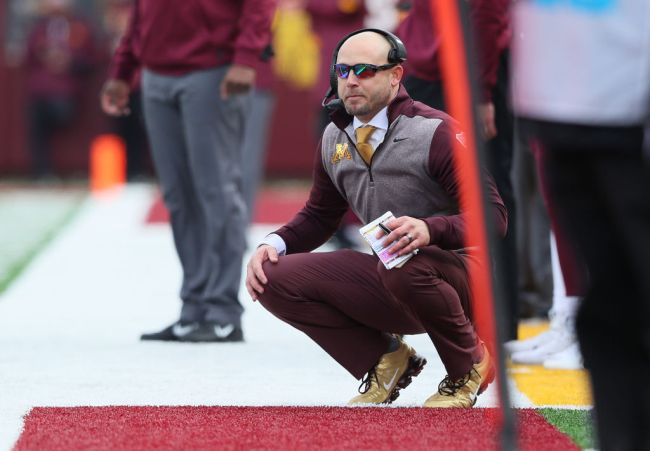 Minnesota head coach P.J. Fleck is most well-known for two things: his ‘row the boat‘ motto and mentality and his gameday attire of wearing a necktie. He’s also a pretty damn good football coach and as a result, he’s reportedly drawing interest at the NFL level. According to NFL Network’s Tom Pelissero, at least one team wants to interview the 40-year-old.

Fleck just wrapped up his fourth season as the head coach of the Golden Gophers leading his squad to a 3-4 record. Minnesota had some of its top players opt out this season given the virus, so the Gophers’ campaign this year could be given the double-asterisk treatment.

After arriving on the scene in 2017 and going 5-7 in his first season, he followed that up with a 7-6 record in 2018 before going 11-2 in 2019 which included a win over Auburn in the Outback Bowl. Prior to landing at Minnesota, Fleck turned around the Western Michigan program that was capped off with the Broncos going 13-1 in his final year.

While his résumé speaks for itself at the college level, the NFL is obviously a different beast and it’s unclear whether or not Fleck’s ‘row the boat’ mentality would translate over to locker rooms filled with grown men being paid millions of dollars. He’s filled with taglines and coach speak, which some NFL players may respond to, while some could see it as incredibly cheesy.

That’s not a shot at Fleck, he’s found his lane and has turned around two programs in less than a decade with his unique coaching style and motivational tactics, but at the end of the day, he seems like a coach that could keep going up the coaching ladder in the college game and maybe not ever stepping into the NFL ranks as a head coach.

Having said that, Fleck did spend a few seasons in the NFL as both a player and a coach, which is a rare combo. Fleck was a wide receiver for the 49ers from 2004-2005 and a wide receiver coach for the Buccaneers in 2012.

Would it be risky, hilarious, and incredibly on-brand to see the Jets or Lions hire a man that yells ‘row the boat’ multiple times a day to help take their franchise out of the gutter? Absolutely, and maybe we’ll get that if the reports are true that Fleck is gaining interest at the next level.