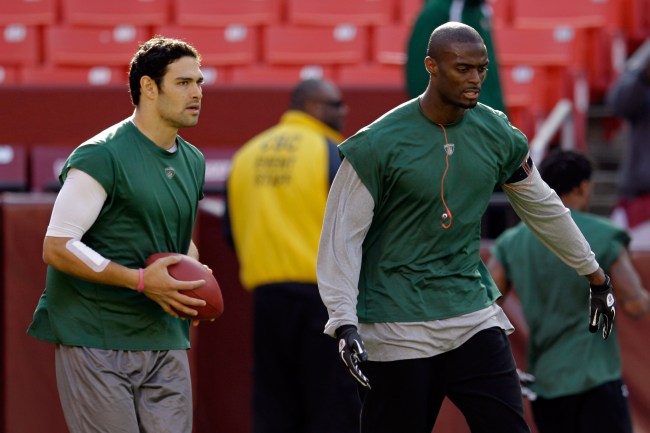 “People who shoot themselves in the leg shouldn’t throw stones or live in glass houses.” I think that’s how the quote goes but I don’t pretend to be an enlightened man.

You know who else shouldn’t pretend to be an authority on good decisions? Plaxico Burress.

Plaxico went from being selected eighth overall in the 2000 NFL Draft to hauling in the game-winning catch of Super Bowl XLII to beat the undefeated Patriots to accidentally shooting himself in the thigh at a nightclub and missing the rest of the 2008 season.

In 2011, Plaxico signed with the New York Jets after a 20-month prison stint for gun possession. At that time, Mark Sanchez was under center for the Jets and the pair hooked up for 45 receptions and eight touchdowns, en route to Plaxico being named the NFL Comeback Player of the Year. You’d think Plaxico would have a soft spot for Sanchez for helping him salvage some redemption after Cheddar Bobbing himself, but if this recent tweet is any indication, the two aren’t exactly sending each other Christmas cards.

I can’t wait to see this QB play for the Washington Redskins for the rest of the season. @mark_sanchez Let me grab my popcorn. #comedyfor3hours #checkdownking Yup I said it!!

No doubt. They are really shooting themselves in the leg not going out and getting someone else.

Obviously the Redskins QB’s have had some major leg injuries in recent weeks. Obviously none self inflicted. It is what it is.

Jets foolishly let @OfficialBraylon go after 2010 and replaced him with the guy who shot himself and then went to jail for 2 seasons while Sanchez was going to 2 AFC Championships.

yea he doesn’t take shots down the field or into his leg, in your case

I'd imagine you'd rather play from the pistol formation