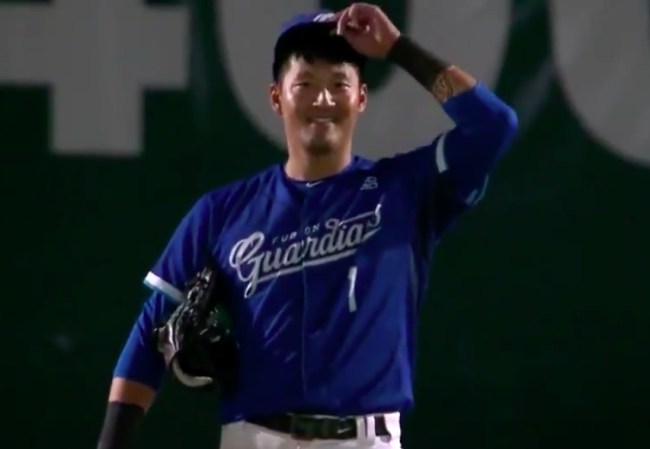 Earlier this year, former Cubs first baseman Mark Grace revealed he declined to take performance-enhancing drugs while playing at the peak of baseball’s Steroid Era in order to avoid falling victim to their tendency to devalue your family jewels.

However, as anabolic-fueled home run machine Mark McGwire taught us all back in the 1990s, there aren’t many things chicks love more than the long ball (although I assume they may not dig what lay beneath the jockstraps of most of the guys who were hitting the biggest bombs during that time).

I may not be a chick but I like to think I can also appreciate a ball that lands in a part of the stadium where there wouldn’t be any fans even if they were currently allowed at Major League Baseball games. With that said, there’s nothing like seeing a player think he’s knocked a pitch out of the park only to have his heart ripped out and his trot come to an abrupt end when an outfielder pulls it back over the wall (also known as “The Reverse Canseco”).

I was a huge Red Sox fan growing up, and while the Green Monster might get all of the glory, one of the more underrated parts of Fenway Park is that the height of the right-field wall is just low enough to allow outfielders to catapult into the bullpen while trying to rob a home run (which worked out much better for Austin Jackson a few years ago than it did for Torii Hunter during the 2013 ALCS).

Taiwanese outfielder Che-Hsuan Lin had a brief stint in Boston the season before Ortiz hit that grand slam but is currently a member of the Fubon Guardians of the Chinese Professional Baseball League. During a game against the Uni-President Lions on Friday, the two squads found themselves tied 2-2 when Pan Yen-Ting appeared to hit a go-ahead home run just out of the reach of Lin’s reach.

However, it turned out the centerfielder had pulled his own version of the hidden ball trick, as he waited until the batter had made his way back to home plate before revealing he’d snagged what amounted to about the longest pop fly that could be hit in that situation.

I know “savage” gets thrown around a lot these days but I can’t think of a better word to use to describe this move.