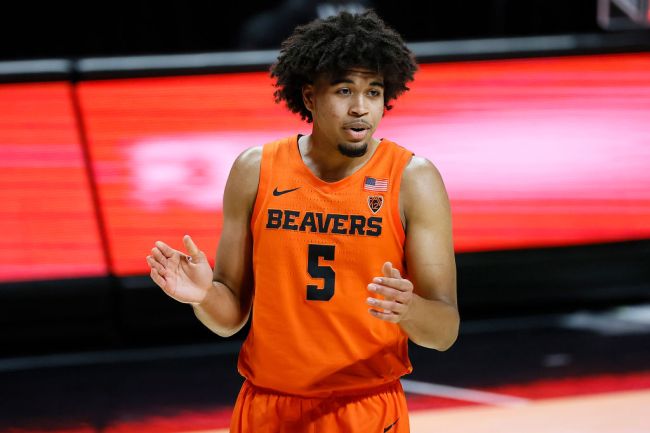 One of the best things about the NCAA Tournament is getting to watch teams you haven’t seen dribble a basketball one time all season long and then pulling for that team because you like a player on the roster. It happens every year where the entire country seemingly gets behind one or two guys and wants nothing more for them to make a deep run in the tournament.

Here is a look at five players that you maybe haven’t heard of, but should get to know heading into March Madness.

The Beavers shocked the hoops world with their magical run to win the PAC-12 Conference Tournament and Ethan Thompson was a big reason as to why Oregon State punched its ticket to the dance. The 6-foot-5 Thompson leads the Beavers in scoring and assists with 15.4 points and 3.9 dimes per game. He’s scored double-digits in 25 of 29 games played this season, including a 31-point outing against Portland and a 25-point game against Utah earlier in the year.

Unless you’re a college basketball junkie or happen to live in Tulsa, Oklahoma, chances are you haven’t heard too much about Max Abmas, which is wild to think about given the fact he leads all of college basketball in scoring averaging over 24 points per game. You’ll certainly get to know him during Oral Roberts’ first-round matchup against Ohio State.

Abmas was the Summit Player of the Year and carries a shooting percentage of 48.4%, which is strong given the fact he shoots the ball over 16 times per game.

Jason Preston is a player that does it all and absolutely falls into that must-watch category. If Ohio is going to upset four-seeded Virginia in the opening round, Preston is going to have to play at an extremely high-level, just like he has all season long.

The 6-foot-4 point guard averages 16.6 points, 7.2 assists, and 6.8 rebounds per game. The Bobcats go as Preston goes, and if he lives up to that stat line, the Bobcats could very well spoil Virginia’s attempt to win back-to-back national titles.

Tyson Etienne was the co-Player of the Year in the American Conference after averaging 17 points, 3.5 rebounds, and 2.6 assists per game. At 6-foot-2, he’s somewhat undersized but has a great ability of getting to great spots on the floor. Etienne has scored 20 points or more 10 times this season.

Nah’Shon ‘Bones’ Hyland gets it done on both sides of the floor. He’s a go-to scorer for the Rams and the team’s lockdown defender. He’s averaging 19.5 points per game this season and is far from afraid about tossing up the three-ball as he attempts nearly eight triples a game; he hit seven threes in a game earlier in the year. If the A-10 Player of the Year gets hot, VCU could pull off the upset against seven-seeded Oregon in the opening round.