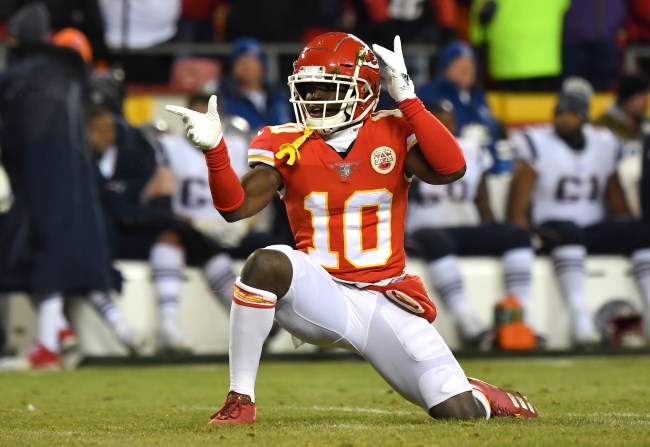 Tyreek Hill just caught a huge break in the child abuse saga, as police have officially closed the investigation as to what happened to Hill’s 3-year-old son, subsequently dropping all charges.

Hill seemingly dodged a huge bullet, as just a month ago, audio surfaced of Hill and his fiancee Crystal Espinal discussing the abuse of their son.

“Daddy punches me,” the boy’s mother, Crystal Espinal, said in a conversation with Hill, paraphrasing the child. “He is terrified of you.”

Hill responded, according to the recording: “You need to be terrified of me, too, b—-.” [via KC Star]

The attorney of the Chiefs wide receiver released a statement claiming that Hill “categorically denies” he ever punched his young son in the chest as a form of discipline, and included a text message exchange between Hill and Espinal in which Espinal admits to being the abuse perpetrator.

Text message exchange between Tyreek Hill and Crystal Espinal after the Dubai recording, as included in the letter to the NFL: pic.twitter.com/pjU7Ras2DM

It’s really hard for me to believe the exchange above wasn’t contrived to save Hill’s ass. It literally sounds like he took Crystal’s phone and sent that to himself.

People close to the investigation told KCTV5 that the case was derailed by a lack of cooperation from those close to the child, as police received anonymous information but did not want to go on record.

I’m no investigator, but if I were to guess who did the abusing, I’d probably go with the dude who was kicked off the team at Oklahoma State for punching and choking Espinal when she was pregnant. Just a hunch.

It will be interesting to see how the Chiefs organization and the NFL respond to the charges being dropped. Hill is currently suspended from all team-related activities after the audio surfaced. Gotta imagine a suspension is imminent.