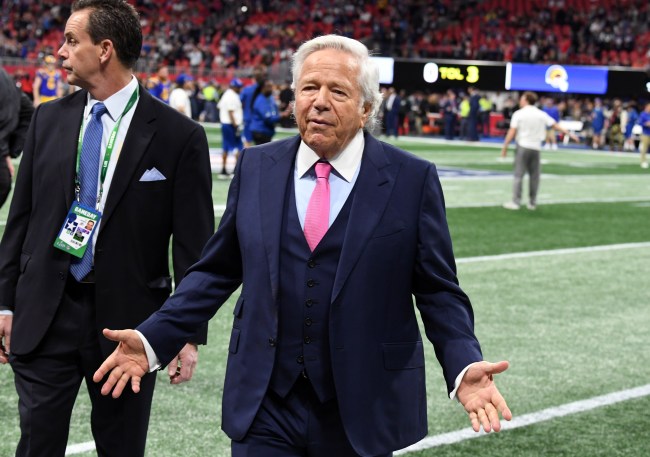 Late last week Patriots owner Robert Kraft and several other “Johns” were charged with soliciting prostitutes at a Jupiter Asian massage parlor that was a part of a human trafficking sting that affected several different prostitution “spas in Florida.

Kraft has since denied the allegations made against him but the police insist that they have him on tape and have released graphic details of the video evidence they have againt him.

Investigators say they have videos of the men who paid for sex at the Asian massage parlor that Robert Kraft allegedly used … and the footage is graphic.

According to police documents obtained by TMZ Sports, officials were able to get a covert surveillance camera inside the Orchids of Asia Day Spa in Jupiter, Florida to record illicit activity.

Cops list a variety of sex acts performed on 26 men who entered the business — one of whom cops say is Robert Kraft. Kraft is not identified by name in the police documents.

The police documents describe the surveillance video in graphic detail — noting a pattern of behavior from the alleged Johns.

The men would enter the spa and pay up front (some used cash, others used credit cards) before being escorted back into a private massage room.

In almost every case, an Asian woman would tend to the client — sometimes two women — and perform sex acts using their hands and mouths.

It does not appear any of the suspects engaged in vaginal intercourse.

Cops say the surveillance videos capture every single detail of the encounters — including ejaculation and subsequent cleanup.

The NFL has since released a statement ensuring that Kraft will be subject to the same “personal conduct policy” that players are subject to.

A new NFL statement on #Patriots owner Robert Kraft’s allegations of soliciting prostitution says the league is seeking “a full understanding of the facts” while not interfering with an ongoing investigation. Here it is in full: pic.twitter.com/8x1XMgen6T

As for Kraft it seems like the police are intent to charge him in the prostitution case and will issue a warrant for his arrest “soon”.

An arrest warrant for #Patriots owner Robert Kraft is “imminent” and could be served as early as today, per @ESPNMichele.