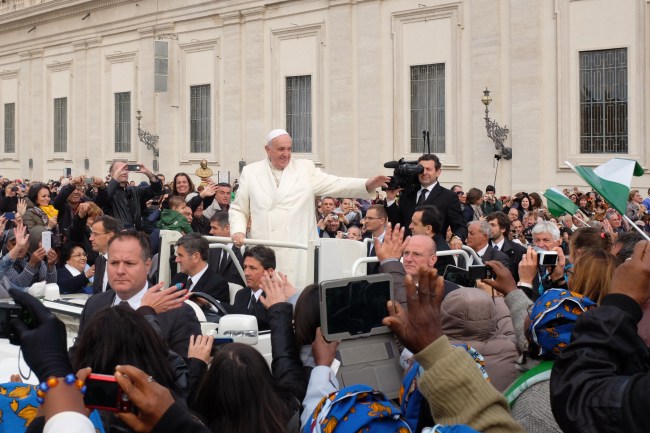 I’m fairly certain that Pope Francis doesn’t turn up on Sundays to watch NFL football but if he did then it’s safe to assume that he would be rooting for the New Orleans Saints, and this was confirmed on Sunday morning when he accidentally blessed the Saints just hours before their road game in Jacksonville against the Jaguars.

The NFL has had some excellent integrations over the years from live-streaming Thusday Night Football games to each team having dedicated hashtags + emojis so fans can show support on game days. When you tweet using the hashtag #Saints the team’s logo automatically pops up next to the hashtag on Sundays.

On Sunday morning, Pope Francis sent out a tweet to his 18.1 million followers where he blessed the Saints. I think most people assume this was an accident, myself included, but we really have no evidence that Pope Francis didn’t mean to do this. For all we know, he was pulling for the Saints over the Jags and this was all intentional.

Today we give thanks to the Lord for our new #Saints. They walked by faith and now we invoke their intercession.

Everyone had a reaction:

Here I thought Gardner Minshew II was the chosen one.
Nope, it was Teddy Bridgewater all along.#Jaguars #Saints #Pope https://t.co/F8qmB8t6ZL

The Saints only answer to ONE higher power.

How people in Louisiana are imagining Pope Francis is today after his tweet about the #Saints (via @trey1920) pic.twitter.com/ImctPLd20W

I took the #Saints on the moneyline, and once the Pope tweeted about them, I knew it was solid.

Pope on 31 other NFL Teams:

Pope on #Saints: Thanks, Faith and Intercession! #WhoDat #PrayDay pic.twitter.com/8650fu66M1

Saints pick someone up from free agency i miss?

Now we know why the #Falcons are so inexplicably bad. Pope not on their side https://t.co/OgcU24cxUj

The Hail Mary doesn't generally work in football, so I don't see why advice from the Pope would.

Brees be with you. And also with Drew.

Without looking, this has to be one of the most popular tweets from Pope Francis in a long time because everyone with a Twitter account (you can find me at @casspa) seemed to get in on the action.