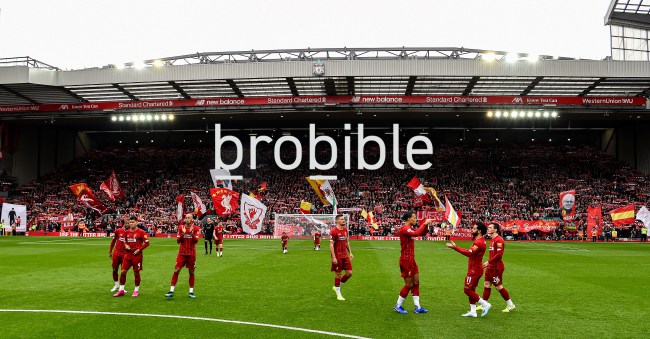 You smell that? Come closer, breathe in, can you smell it?

That, my friends… are the ashes of the United States Men’s National Team, who spent the international break losing to a country whose favorite sport is played on frozen lakes for the first time in decades. American soccer, baby.

Luckily for all of us, the horror of the USMNT recedes into the background as club football resumes to save us all from the misery of our perpetually awful national team.

For everyone who wanted proof that it happened, here is Stef Galinski's headed goal from inside his own half.

Liverpool: Still unbeaten on the year, Liverpool head into the weekend with the opportunity to tie the all-time Premier League straight wins record with 18. With United limping through the international break like a mortally wounded animal, the Reds should feast on the Red Devils and the quickly rotting corpse of Ole Gunnar So-fired.

Manchester City: Similar to last season, City has hit a rough patch of form that sees the club losing — not tying, losing — to blatantly inferior teams. However, as we know, City is capable of putting together win streaks of 15+ games, meaning they’re never really out of it until they’re really out of it.

But, this time, City is devastated by injuries on the backline, meaning they’re at risk of dropping points in any game that they don’t utterly dominate. A trip to Palace — one of the most difficult places to play in the league — will prove to be yet another staunch test for the defending champions, who actually lost to Roy Hodgson’s side on their own pitch last year.

Arsenal: Who the hell knows, ya know? They’re this, they’re that. They’re up, they’re down. Lacazette should be back, which is a win for everybody.

Leicester City: Despite most recently losing at the hands of Liverpool, Leicester City are still flying high this season as they’re widely regarded as being one of the top four teams in England at this time.

Chelsea: It may sound odd, but despite being in 5th, it’s actually a nice time to be a Chelsea fan. The squad is young, fun, hungry, and isn’t bearing the weight of expectations. They can just go out and play. Chelsea fans are in a unique situation where performance matters more than results for the rest of the season.

Crystal Palace: Okay, I’ll say it since we’re all thinking it anyway: what in the actual fuck? Yes, I get that it’s still kindaaaa early in the season — only eight out of 38 games have been played — but the fact that Palace currently sits sixth with a record of 4-2-2 is nothing short of astounding. Put it this way: they’re only TWO POINTS BEHIND MANCHESTER CITY, which is mindboggling considering just two seasons ago they set the record for the poorest start to the season, opening their campaign with seven-straight goalless defeats.

We’re going to make this simple: Everton STINK. While their season is on the line and that makes me nervous, West Ham is more talented and Manuel Pellegrini is a far superior manager to Marco Silva. The Blues will put up a fight in front of their home crowd but I think West Ham have enough to claim a point, if not more.

Liverpool TO WIN at Manchester United = -155

There was once a time where Liverpool vs Manchester United was the biggest game in the world of club soccer. And while the match still remains among the world’s elite, it’s lost of its luster in recent years due to Manchester United’s downturn in global stature (on the pitch, that is).

That said, Liverpool have yet to win at Old Trafford under Jurgen Klopp, proving that getting a win at Manchester United is never an easy task. Nevertheless, Liverpool are arguably the most in-form team in the world — having won 17 straight Premier League games — while United have only won one of their last five league games.

To make matters worse of Ole Gunnar’s squad, they’re marred by injuries and will likely be without the services of Paul Pogba and David De Gea.

United will put up a fight (and by put up a fight, I mean park the bus), but in the end, the well-rested Champions of Europe will have too much for the Red Devils and will walk out of Manchester with their first Old Trafford win under Klopp.

“I’ve not heard Paul say he doesn’t want to be here. Paul wants to stay here and play well. Paul is part of our plan. When you’re at Man United, you do get pictures, speculation. I don’t have any problem with that at all,” Ole Gunnar Solskjær on Paul Pogba being photographed with Real Madrid manager Zinedine Zidane in Dubai.