Presbyterian College Is The Most Exciting Football Team In The Country After Hiring Coach Who Never Punts, Always Kicks Onside 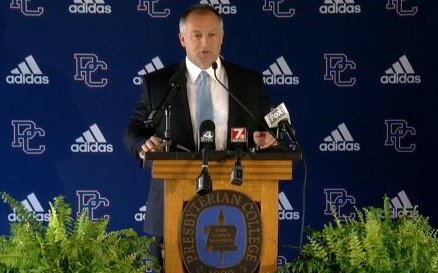 Presbyterian College football has not had a full winning season since 2014 and is not considered a powerhouse by any stretch of imagination, but the program has decided that enough is enough and has hired Kevin Kelley as its next head football coach. This is a huge move for the team and for college football as a whole. It has the Blue Hose punters shaking in their boots.

Kelley will head to South Carolina by way of Pulaski Academy in Little Rock, Arkansas, where he won nine state titles and was named the USA Today High School Coach of the Year in 2016. While his success on the high school level is great, he’s headed to a small FCS school and it doesn’t seem like anything worth talking about. However, his unconventional approach to the sport is set to turn the Pioneer Conference on its head.

His quantitative method of coaching stems from a the fascinating research of California-Berkeley economics professor David Romer. If you’re an analytics-forward football junkie, it’s worth the read.

Basically, Romer found that NFL teams should always go for it on fourth down if it’s a four yards or less situation. This risk aversion vs. risk taking strategy evolved into Kelley’s M.O., and he used the statistical advantage to achieve quite a bit of success.

Beyond fourth down decision-making, Kelley incorporated frequent laterals into his offense and has “disrupted” the onside kick.

The way he sees it— if his team kicks it into the end zone, the other team gets the ball at the 20-yard-line. If his team kicks it onside and does not recover, its opponents get the ball around their own 45-yard-line. Kelley is willing to sacrifice the 25-yard differential because statistically, his team will recover no less than 25% of its onside kicks. Those extra possessions make up for the lost field possession, giving his team more opportunities to score.

And to his credit, it’s worked. Pulaski has had one of the most dominant offenses in the country, on any level, over the past two decades. Oh, and winning 9 state titles in 18 years as head coach certainly helps back up his cause.

His innovative success in Little Rock has made him the “Thinking Man’s high school football coach” to some, and “The Mad Scientist of high school football” to others. Either way, he has garnered quite the reputation and has even become a confidant of Bill Belichick.

“Coach Kelley is probably the top high school coach in the country,” Belichick said in December. “I’ve followed him. He’s a little unconventional, but he’s had great success, and he’s had a lot of players come through there. I have great respect for coach Kelley and the program he runs, and some of the creative things that he does.”

Kelley has said in previous interviews that he won’t necessarily bring his no-punt/no-kickoff strategy to the college game. He adopted the strategies that made him a national name because they offered an advantage on the high school level, not necessarily on the collegiate level.

Presbyterian’s new head man takes over a program that has gone 16-46 since the beginning of the 2015 season. There is really nowhere to go but up, but it is impossible to ignore how impactful his presence can be. If Kelley can turn things around at a small liberal arts college in rural South Carolina by simply embracing analytics and math — especially if he does it quickly — it could flip the entire game of football on its head.

Whether he does or doesn’t carry over his unique approach, Kelley’s goal is to win the conference in year one and the FCS National Championship in year two. Stay tuned.